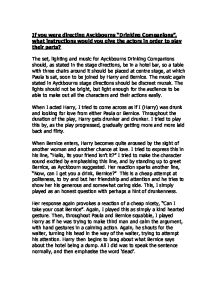 If you were directing Ayckbourns &amp;#147;Drinking Companions&amp;#148;, what instructions would you give the actors in order to play their parts?

If you were directing Ayckbourns "Drinking Companions", what instructions would you give the actors in order to play their parts? The set, lighting and music for Ayckbourns Drinking Companions should, as stated in the stage directions, be in a hotel bar, so a table with three chairs around it should be placed at centre stage, at which Paula is sat, soon to be joined by Harry and Bernice. The music again stated in Ayckbourns stage directions should be discreet muzak. The lights should not be bright, but light enough for the audience to be able to make out all the characters and their actions easily. When I acted Harry, I tried to come across as if I (Harry) was drunk and looking for love from either Paula or Bernice. Throughout the duration of the play, Harry gets drunker and drunker. I tried to play this by, as the play progressed, gradually getting more and more laid back and flirty. When Bernice enters, Harry becomes quite aroused by the sight of another woman and another chance at love. ...read more.

All I did was to speak the sentence normally, and then emphasise the word 'dead'. Next, Harry begins to get stressed at the fact that the waiter is unavailable to serve drinks, so I played this by slamming my hand on the table and storming off towards the bar. My re-entrance was a happy one. "Here we are then girls!" is the line at my re-entrance. I used this, with the dealing out of the drinks and a huge smile to try and flirt and lure the girls in room 249. Bernice, again reacts with "Oh, that's a very big one." At that, Harry should laugh and smile before delivering the line, "Well, saves jumping up and down, doesn't it?" The second part of the line "Now then, finished your argument? Cheers?" is to encourage the girls to drink, so at this, the actor should raise his glass. The next few lines simply show Harry sucking up to Bernice's argument. The line, "Right now. ...read more.

when he continues with his pathetic incessant attempts at flattery. Then he laughs, as directed by Ayckbourn, a drunken giggle. Then he continues with an offer of dinner, where neither of the girls are interested. In summary, Harry should act as if he was drunk, and basically a sleaze bag, who is bored with his wife and needs love from someone younger and more fun and exciting. Paula is a little more relaxed with a hint of naivety. She is only interested in Harry for the free drinks but when it comes to ditching him, she is not as confident as Bernice. Bernice is, in short, a b***h. Her speech is short and to the point. She is not interested in Harry in the slightest and is the one who throws all the blows when it comes to leaving Harry. The details are in the script and the actors should pay close attention to their lines. The difference between the characters is considerable and if each of the characters played their parts correctly, the play will link to the reality Ayckbourn intended and the play will be a success. ...read more.