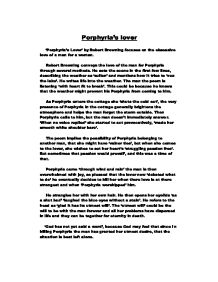 Porphyria's lover 'Porphyria's Lover' by Robert Browning focuses on the obsessive love of a man for a woman. Robert Browning conveys the love of the man for Porphyria through several methods. He sets the scene in the first few lines, describing the weather as 'sullen' and mentions how it tries to 'vex the lake'. He writes life into the weather. ...read more.

Then Porphyria calls to him, but the man doesn't immediately answer. 'When no voice replied' she started to act provocatively, 'made her smooth white shoulder bare'. The poem implies the possibility of Porphyria belonging to another man, that she might have 'vainer ties', but when she comes to the lover, she wishes to set her heart's 'struggling passion free'. ...read more.

He strangles her with her own hair. He then opens her eyelids 'as a shut bud' 'laughed the blue eyes without a stain'. He refers to the head as 'glad it has its utmost will'. The 'utmost will' could be the will to be with the man forever and all her problems have dispersed in life and they can be together for eternity in death. 'God has not yet said a word', because God may feel that since in killing Porphyria the man has granted her utmost desire, that the situation is best left alone. ...read more.