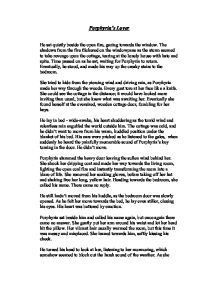 Porphyria's Lover He sat quietly beside the open fire, gazing towards the window. The shadows from the fire flickered on the windowpane as the storm seemed to take revenge upon the cottage, tearing at the lonely house with hate and spite. Time passed on as he sat, waiting for Porphyria to return. Eventually, he stood, and made his way up the creaky stairs to the bedroom. She tried to hide from the piercing wind and driving rain, as Porphyria made her way through the woods. Every gust tore at her face like a knife. She could see the cottage in the distance; it would have looked more inviting than usual, but she knew what was awaiting her. ...read more.

She removed her soaking gloves, before taking off her hat and shaking free her long, yellow hair. Heading towards the bedroom, she called his name. There came no reply. He still hadn't moved from his huddle, as the bedroom door was slowly opened. As he felt her move towards the bed, he lay even stiller, closing his eyes. His heart was battered by emotion. Porphyria sat beside him and called his name again, but once again there came no answer. She gently put her arm around his waist and let her head hit the pillow. Her vibrant hair usually warmed the room, but this time it was messy and misplaced. ...read more.

He knew she had felt no pain, and he leaned over and opened her eyelids. He looked at her startling blue eyes in wonderment. He loosened the hair - her own beautiful hair with which he had taken her last breath. He kissed her blushing, burning cheeks and propped her head up on the pillow. He sat back, and as he looked deeper still into her still open blue eyes, he thought about the fear she no longer had, and the pain she no longer felt. He was content with sitting with her in the isolation of the cottage - in the warmth Porphyria brought in with her. He and her, together as one. All night long, they didn't move. ...read more.