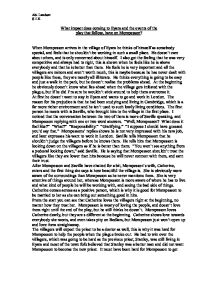 What impact does coming to Eyam and the events of the play that follow, have on Mompesson?

What impact does coming to Eyam and the events of the play that follow, have on Mompesson? When Mompesson arrives in the village of Eyam he thinks of himself as somebody special, and feels that he shouldn't be working in such a small place. He doesn't care about others, and is only concerned about himself. I also got the feeling that he was very competitive and always had to right, this is shown when he feels like he is above everybody and that he is better than them. He feels he is very important and all the villagers are minors and aren't worth much, this is maybe because he has never dealt with people like these, they are mostly all illiterate. He thinks everything is going to be easy and just a walk in the park, but he doesn't realise the problems ahead. At the beginning he obviously doesn't know what lies ahead when the village gets infested with the plague, but if he did I'm sure he wouldn't stick around to help them overcome it. At first he doesn't want to stay in Eyam and wants to go and work in London. The reason for his prejudice is that he had been studying and living in Cambridge, which is a far more richer environment and he isn't used to such lowly living conditions. The first person he meets with is Saville, who brought him to the village in the first place. ...read more.

I noticed that Stanley has not got so much to lose when it comes to the plague, he hasn't got a family or a home, whereas Mompesson has a family and his job which is also important to him. When the plague arrives in the village, Mompesson's first reaction is what to do with the bodies. He doesn't seem bothered about the fact that the plague has arrived, only bothered about what to do with the dead people. He knows almost immediately that it is the plague after he has seen the marks on George Vicars face. He recognises them from when he had seen them before, but tries not to panic. Instead he is calm, and tells Catherine that he thinks the plague has come. "Marks on his skin. I think I've seen them before. I think I know what they are." This is how he tells Catherine about his suspicions, and later he says "(unemotionally) I think it's plague," he doesn't seem upset or worried about it. The fact that he said it 'unemotionally' makes me think he has dealt with it before maybe. He later tries to get help from Stanley, he is growing in maturity, he has confronted the fact that there is a problem, and is swallowing his pride to ask for help from Stanley. "I choose to ask your help...I'm a stranger here, a young man, and I find it hard - to make myself loved." Here he opens up a bit to Stanley, he explains his insecurities. ...read more.

The small crowd that surround Mompesson continue on to tell him they have faith in him, and their prayers are with him in his time of pain. "But you loved us with all your heart, too, in the hardest way. Not with words. With actions." They explain to him they realise how much he has done for them. He has changed so much since the beginning when he arrived in Eyam. At first he didn't care for them at all, but he had learnt to love and care for them. "I loved them? I felt nothing...And they forgave me, with what might be their last breath...I don't understand." Mompesson can't see that he has loved them, he still believes that he is how he was at the beginning. But really he has got off his pedestal above them, and become more of a human being. As the play went on, Mompesson's words and actions change, they go from bad to good. He learns to deal with suffering, and forgets that he didn't want to work there. The plague arrived in Eyam in the Autumn of 1665, and it ended in the Autumn of 1666. This means that Mompesson has only ages one year, but mentally he has aged a great deal more. He has matured and learned to come to terms with pain and loss. He has grown in mind, in such a small amount of time. Mompesson's actions throughout the play show and prove that in the end, he did care for the villagers, whether they cared for him or not. His relationship with Stanley also comes to a halt, and they part on good terms. Abi Lambert S11K ...read more.