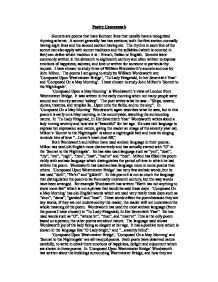 Wordsworth and Milton, Sonnets and poems.

Poetry Coursework Sonnets are poems that have fourteen lines that usually have a recognized rhyming scheme. A sonnet generally has two sections; with the first section normally having eight lines and the second section having six. The rhythm in each line of the sonnet can also apply with sonnet traditions and the syllables (which is counted in feet) can define which tradition it is - French, Italian or English. Sonnets were commonly written in the sixteenth to eighteenth century and often written to express emotions of happiness, sadness, and love or written for someone in particular by request. I have chosen to study three of William Wordsworth's sonnets and one by John Milton. The poems I am going to study by William Wordsworth are: 'Composed Upon Westminster Bridge', 'To Lady Fitzgerald, In her Seventieth Year' and 'Composed On a May Morning'. I have chosen to study John Milton's 'Sonnet to the Nightingale'. 'Composed Upon a May Morning' is Wordsworth's view of London from Westminster Bridge. It was written in the early morning when not many people were around and the city seemed 'asleep'. The poet writes what he saw - "Ships, towers, domes, theatres, and temples lie...Open unto the fields, and to the sky;". In 'Composed On a May Morning' Wordsworth again describes what he sees, but in this poem it is early on a May morning, in the countryside, watching the surrounding nature. ...read more.

Both poets have observed nature carefully, to write in detail there emotions of happiness, delight and enjoyment which are shown in these poems. In 'Composed Upon Westminster Bridge' Wordsworth has written about the buildings surrounding Westminster Bridge, and how they are "...so touching in its majesty:", "beauty", "silent, bare", "...bright and glittering...", "beautifully", "splendour", "...never felt, a calm so deep!" and "sweet". These words all give the poem an upbeat tone. The mood of this poem is cheerful, Wordsworth describes the emptiness of the City but shows that in its bareness, he can see its beauty at its best. In 'Composed On a May Morning' Wordsworth again writes with an upbeat tone, he is enjoying watching the lambs and delighting in their exuberance. He describes what they are doing, how they are sitting by their mothers "Couch near their dams..." and running around "...wherever he may run". Wordsworth uses joyful language throughout the poem "heavenly guide", "joy", "shining", and "pleasures". The language in 'Sonnet to the Nightingale' that makes it upbeat is "...fresh hopes...", "...Lover's heart dost fill,", "...jolly Hours...", "propitious", "Thy liquid notes...", "...success in love.". But after the sixth line the poem is not so joyful, Milton writes sorrowfully, "Foretell my hopeless doom..." and "As thou from year to year hast sung too late". Wordsworth's "To Lady Fitzgerald, In Her Seventieth Year" is a cheery and affectionate poem. ...read more.

'Composed On a May Morning', 'Sonnet to the Nightingale' and 'Composed Upon Westminster Bridge" follow the Petrarchan tradition with lines that rhyme 'a b b a a b b a' and the remaining six lines having two different rhymes. "To Lady Fitzgerald, In Her Seventieth Year" does not follow any recognisable rhyming scheme that I know of. All four sonnets follow the English tradition of having ten feet per line. The rhythm and rhyme affect the poems because they are all positive and they are all upbeat. 'Composed On a May Morning' and 'Sonnet to the Nightingale' are similar poems because both poets talk of surrounding nature that can only be watched at certain times of the year or day. Wordsworth watched the lambs in May and Milton listens to the nightingales at night. Both poets also talk about the presence of a God or gods, Wordsworth writes "Why to God's goodness cannot We be true,". Both 'Composed Upon Westminster Bridge' and 'Composed On a May Morning' have two sections where the first section finishes on the eighth line, which is traditional for sonnets. 'To Lady Fitzgerald, In Her Seventieth Year' first section finishes on the ninth line. John Milton's 'Sonnet to the Nightingale' first section finishes in the middle of the seventh line. While William Wordsworth has kept to the traditional way of writing the sonnets I have studied I think John Milton is a more effective writer because he has used rich vocabulary to show his emotions of love and has compared it with something the reader can relate to. ...read more.