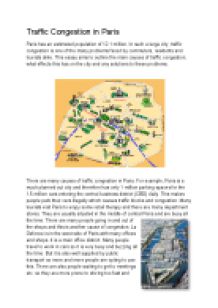 ﻿Traffic Congestion in Paris Paris has an estimated population of 12.1 million. In such a large city, traffic congestion is one of the many problems faced by commuters, residents and tourists alike. This essay aims to outline the main causes of traffic congestion, what effects this has on the city and any solutions to these problems. There are many causes of traffic congestion in Paris. For example, Paris is a much planned out city and therefore has only 1 million parking spaces for the 1.5 million cars entering the central business district (CBD) daily. This makes people park their cars illegally which causes traffic blocks and congestion. Many tourists visit Paris to enjoy some retail therapy and there are many department stores. They are usually situated in the middle of central Paris and are busy all the time. There are many people going in and out of the shops and this is another cause of congestion. La Defence is in the west side of Paris with many offices and shops, it is a main office district. ...read more.

This means that the roads are very old, narrow and are even cobbled. In Paris there are many road intersections and one way systems, this means there is traffic lights causing excess slowing down of traffic. http://www.pariserve.tm.fr/quartier/photo/cite-stlouis.jpg The effects of traffic congestion are also very major. For example, the rate of asthma has also increased considerably due to pollution from traffic congestion. Matthew, a disgruntled roller-skater, said ?On a windy day the air is not too bad but when there is no wind and you get stuck behind a car or lorry exhaust pipe it?s awful.? Also industrial activity and agriculture have been pushed to the suburbs as they take up too much space. The old industries in the inner city are slowly being demolished and new housing is being made in their place. Another effect of traffic congestion is that there could be more deaths prevented because the ambulances and other emergency service vehicles are being held up in the traffic. Since people are also being held up in traffic they are arriving to work late and the businesses are suffering. ...read more.

I think this is a good idea as it means farmers are not forced into becoming factory laborours due to high land prices. As a way to promote ?velib? and cycling instead to driving in general, the French government have put in designated cycle lanes. This is a good idea as it encourages people to get on their bikes and it is healthy too. Another ? not so good ? solution to tackle traffic congestion is banning cars according to their number plate e.g. odd and even number plate?s alternate. This may be working as reasonably well off citizens will have one car of each number plate. One solution which is working well so far is putting lower taxes in the suburbs. This encourages people to move to the large detached houses which are newly available there rather than staying in the city itself causing much congestion in terms of parking places etc. If I was the official in charge of the city, I would continue the solutions which are already working well e.g. ?velib? but axe banning cars according to their number plate due to the cons overweighing the pros. I would also put in place a law which alters car taxes according to their size. ...read more.