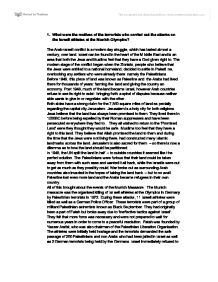 1. What were the motives of the terrorists who carried out the attacks on the Israeli athletes at the Munich Olympics? The Arab-Israeli conflict is a modern day struggle, which has lasted almost a century, over land. Israel can be found in the heart of the Middle East and is an area that both the Jews and Muslims feel that they have a God given right to. The modern stage of the conflict began when the Zionists, people who believe that the Jews were entitled to a national homeland, decided to settle in Palestine, overlooking any settlers who were already there: namely the Palestinians. Before 1948, this piece of land was known as Palestine and the Arabs had lived there for thousands of years: farming the land and giving the country an economy. Post 1948, much of the land became Israel, however Arab countries refuse to see its right to exist: bringing forth a spiral of disputes because neither side wants to give in or negotiate with the other. Both sides have a strong claim for the 7,850 square miles of land especially regarding the capital city Jerusalem. Jerusalem is a holy city for both religions. ...read more.

Israel immediately refused to negotiate with terrorists and after unplanned and rushed rescue attempts the hostages were killed as well as five of the eight terrorists involved. One of the main reasons Black September had for orchestrating such an attack was not only for the safe passage of 200 Palestinian prisoners, but also to make the world aware of the growing problem in the Middle East. The overcrowding and unhealthy refugee camps were Palestinians were staying after being removed from their own homes for almost 20 years now was a huge reason for the terrorists to decide to attack. Black September was formed in 1970, September 16th, after King Hussein of Jordan removed the Palestinian militant organisations from his country through fear of retaliating attacks from Israel. He tried to achieve this by taking over the refugee camps, but the Palestinians resisted, which resulted in many of them being killed by the Jordanian army, while the rest fled to other Arab countries like Lebanon and Syria. The BSO were extremely angry at this turn of events and took revenge by killing the Jordanian Prime Minister in Egypt. In general, the BSO wanted all of Palestine back as quickly as possible. ...read more.

Security which could be offered to these Jews would also increase if they moved to an area where there was larger Israeli population. Israel was also facing heavy pressures from other countries, especially the USA to reduce hostilities between itself and Hamas, the Palestinian elected party. This move had 'the backing of President Bush' and so in order to keep American support which had helped with military equipment and international support in the past, it was an important move to make. Prime Minister Ariel Sharon continues to face opposition from his own party as they see it as a victory for Hamas. Many cabinet members are only reluctantly endorsing the plan as they feel that with this solution, Israel has made all of the concessions. 'They believe any pullout should be the result of negotiations between Israel and Palestine rather than a unilateral move.' Source D shows how the Gaza withdrawal is motivated by self-preservation. Many Jewish residents of Gaza are unhappy with having to move and despite any sympathies that others may have for them, it is strongly felt that 'the wasted money, the moral price' are no longer worth paying for such a minority of people. Source A shows the force being used on members of the Israeli Army who refused orders in this matter. ...read more.