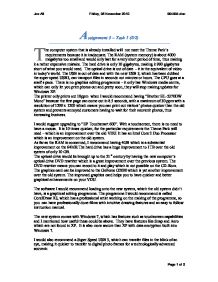 Choosing Hardware. he computer system that is already installed will not meet the Theme Parks requirements because it is inadequate. The RAM (system memory) is about 4000 megabytes too small and would only last for a very short period of time

Assignment 3 - Task 1 (D2) T he computer system that is already installed will not meet the Theme Park's requirements because it is inadequate. The RAM (system memory) is about 4000 megabytes too small and would only last for a very short period of time, thus making it a rather expensive mistake. The hard drive is only 10 gigabytes, making it 990 gigabytes short of what you would need. The optical drive is out of date - it is the equivalent of video in today's world. The USB is out of date and with the new USB 3, which has been dubbed the super speed USB3, can transport files in seconds not minutes or hours. The CPU goes at a snail's pace. There is no graphics editing programme - it only has Windows media centre, which can only let you print photos out and pretty soon, they will stop making updates for Windows XP. The printer only prints out 18ppm when I would recommend having "Brother HL-5370DW Mono" because the first page can come out in 8.5 seconds, with a maximum of 30 ppm with a resolution of 1200 x 1200 which means you can print ...read more.

The improved graphics card helps you to have quicker and better graphical enhancements on your VDU. The software I would recommend loading onto the new system, which the old system didn't have, is a graphical editing programme. The programme I would recommend is called CorelDraw X3, which has a professional artist working on the making of the programme, so you can have professionally done films with intuitive drawing features and an easy to follow instruction manual. The new system comes with Windows 7, which has features such as touchscreen capabilities and I mentioned how useful these could be above. They have features like Snap and Aero which are not found in XP. It is also more secure than XP with data encryption built into Windows 7. I would also recommend a Super Speed USB 3, which can transfer files in the blink of an eye, making it quicker to transfer to digital photo frames for a technologically advanced souvenir. I believe that the new system meets and exceeds the specification, with plenty of time saving devices meaning that business would increase and higher quality photos would be produced, and you can improve photos using CorelDraw Users may need ...read more.

The memory in the old system was poor. The memory in the new system is vastly increased, more than 10 times. Once trained in the new editing package I have recommended, "CorelDraw", the Staff can produce great looking professional photos like the ones in magazines. . The resolution is the same for both printers, but the speed is massively improved which will help you with editing as you can print it off much quicker. The printer in the old system is slow to print, resulting in annoyed employees and customers. The printer I recommended for the new system is just over double the speed and prints at 33 ppm, and with the first page printing in 8.4 seconds for a speedy delivery, this will provide a superior service with an increased profit margin. The old system is slow and not very user-friendly and the new system allows an increased productivity and an increased target audience, e.g., help for dyslexics, partially-sighted people, and even blind people. The CorelDraw programme will allow you to edit photos 10 times easier than with your old system, with increased tools to add to the overall effect of the photos. ?? ?? ?? ?? Joe Alt Friday, 05 November 2010 graphics ass 3 Page 1 of 2 ...read more.