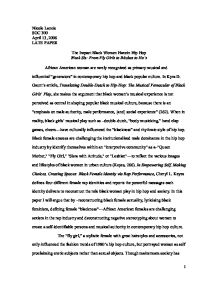 In Kyra D. Gaunts article, Translating Double-Dutch to Hip-Hop: The Musical Vernacular of Black Girls Play, she makes the argument that black womens musical experience is not perceived as central in shaping popular black musical culture, because

Week Six: From Fly Girls to Bitches to Ho’s

African American woman are rarely recognized as primary musical and influential “generators” in contemporary hip hop and black popular culture. In Kyra D. Gaunt’s article, Translating Double-Dutch to Hip-Hop: The Musical Vernacular of Black Girls’ Play, she makes the argument that black women’s musical experience is not perceived as central in shaping popular black musical culture, because there is an “emphasis on male authority, male performance, [and] social experience” (262). When in reality, black girls’ musical play such as –double-dutch, “body musicking,” hand clap games, cheers—have culturally influenced the “blackness” and rhythmic style of hip hop. Black female emcees are challenging the institutionalized male dominance in the hip hop industry by identify themselves within an "interpretive community" as a–"Queen Mother," "Fly Girl," "Sista with Attitude," or "Lesbian"—to reflect the various images and lifestyles of black women in urban culture (Keyes, 266). In Empowering Self, Making Choices, Creating Spaces: Black Female Identity via Rap Performance, Cheryl L.

Hip hop culture is seen as a heterosexual, male dominated industry with little room from female sexual expression; however, with the emergence of the lesbian identity, rapper Queen Pen showed ones role in hip hop was separate from ones sexual orientation. Queen Pen, in the 1980’s, was the first rapper to rhyme about queer culture; her ultra femme appearance and “beat-boy like” gestures acted as visual identifiers that lesbian woman are fighting the homophobic stereotype that lesbians are butch. The black lesbian identity in rap is helping women find a balance between their femininity, gender role and sexual orientation in relation to urban society. Black women are expected to tempt men with there sensuality, but Queen Pen shows that’s not the case and adds another layer on complexity to the black female identity.

In response to male emcees portrayal of woman as sexual object, female rappers are lyricising economic and political issues that plague black women. Their “lyrical skillz” question the injustices in urban society and represent women’s central voice in hip hop.

Women‘s musical contributions in rap have been underrepresented due to the “hegemonic discourse” that surround black women’s dysfunctional social role in urban culture. The emergence of positive female rap identities like –“Fly Girl,” “Queen Mother,” ”Lesbian”—have created a powerful voice that respectfully represent women in black popular culture. Author Keyes, defines these images “as platforms to refute, deconstruct, and reconstruct alternative visions of their identity;” however, her definition of the “Sista with Attitude” persona contradicts her assertion (274). Although Keyes argues that these women demand the respect from their peers and industry, she describes them as marginal within hip hop because the sistas are seen “running their mouth” and presenting themselves as “highly materialist, violent, lewd” (272). Gaunt argues that black girls’ childhood play has musically influenced hip hop culture, but she overly emphasizes that such “positive” games reinforce dysfunctional gender role stereotypes; which parallel the images that the “Sista with Attitude,” in some form, represent. Though some aspects of the female rap persona negatively influence the perception of black women in hip hop, female emcees are proving their gendered experiences are authentic and central in black musical culture.