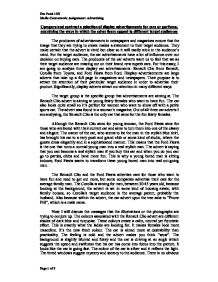 Compare and contrast a selection of display advertisements for cars or perfume, examining the ways in which the advertisers appeal to different target audiences

Compare and contrast a selection of display advertisements for cars or perfume, examining the ways in which the advertisers appeal to different target audiences The producers of advertisements in newspapers and magazines ensure that the image that they are trying to create makes a statement to their target audience. They make certain that the advert is vivid but clear so it will easily stick in the audience's mind. For the target audience, the car advertisements have a lot of influence over our decision on buying cars. The producers of the car adverts want us to feel that we as their target audience are missing out on their brand new superb cars. For this essay, I am going to analyse three display car advertisements: Renault Clio from Renault, Corolla from Toyota, and Ford Fiesta from Ford. Display advertisements are large adverts that take up a full page in magazines and newspapers. Their purpose is to attract the attention of their particular target audience in order to advertise their product. Significantly, display adverts attract our attention in many different ways. The target group is the specific group that advertisements are aiming at. The Renault Clio advert is aiming at young feisty females who want to have fun. The car also looks quite small so it's perfect for women who want to show off with a petite sports car. The advert was found in a woman's magazine. Out of all three car adverts I am analysing, the Renault Clio is the only car that aims for the fun feisty females. Although the Renault Clio aims for young woman, the Ford Fiesta aims for those who are bored with their current car and aims to turn them into one of the classy and elegant. The owner of the car, who seems to be the man in the stylish blue shirt, has brought his car to a very posh and grand club or some kind of studio, where the guests dress elegantly and in a sophisticated manner. ...read more.

However there is some quality effective vocabulary within the copy. For example "Boost your Va Va Voom to the power of 172" suggests that you can take your driving force up one more stage with this staggering car. "Va Va Voom - like beauty - come from within" suggests that the power of the engine comes naturally and also beauty links back to feminism. The size of the main copy is quite small but it stands out against the dark background because it is in white, which is also a calm relaxed colour and it works well with the blue and turquoise. All the writing in the photograph is white. The fonts are different. There are four fonts associated with the copy and none of them look tacky. They all look sophisticated and stylish - just like the car itself. In the Corolla advert, the logo is in the top right corner. The actual logo is in red, which stands out against the light blue sky. The words in the slogan work very well. "The car in front is a Toyota" means that this car is the head of all cars; it is the leader of all cars. This shows the audience that this car is the boss, and therefore implies power, control and supremacy. These types of statements are used in adverts without backing frequently to convey calm assertion to our minds. The slogan "The new Corolla. A car to be proud of" is white against the dark background. These are the words that tell the audience why the Corolla is better than other, because it is a car to be proud of. Also in the bottom left corner there is a small copy informing the audience that Toyota won the Car of the Year Award in 2002. This has a lot of influence over the target audience because this is exactly what they want to hear because the audience want to buy a good-quality first-class car and Toyota proves that they have managed to create this image because they won the Car of the Year Award in 2002. ...read more.

For example if a car company is aiming to advertise their car at young woman, they will put their advert in a woman's magazine. There is no point putting the advert in a man's magazine if it is aimed at women. It was easy to understand which target group each advert was aimed at because it linked to the magazine they were found in. Overall, car adverts use different techniques to interest the audience. Renault Clio uses a fresh neutral yet futuristic style to show the ladies that this car can boost their energy to the maximum. The Corolla advert uses humour in a usual outdoor sunny spot to advertise its car, causing the audience to take an interest. The Ford Fiesta advert uses an emotion appeal to try to make the audience feel desperate in buying the car so they can have more fun wherever they take it instead of being stuck at home, like the man in the illustration. I think they are similar in one particular way. The designers would have given a great deal of thought to the image that the audience have in mind. The three adverts are very similar in making the car stand out from other normal cars. The designers of these adverts want us to feel that their particular car is unordinary and completely different from all the other cars. By portraying the car in each advert and the main statement, it shows that each car is unusual in one way or another, and this is what brings the audience to feel more towards the decision of buying the car. Either way companies use many methods to advertise their product, in different ways and styles. The point of the adverts is to make their target audience sense a feeling that brings them closer to the decision of buying their car. Sources Ford Fiesta advert - Sky Magazine Corolla advert - Sky Magazine Renault Clio advert - She Magazine Eva Patel 10N Media Coursework Assignment: Advertising Page 1 of 5 ...read more.