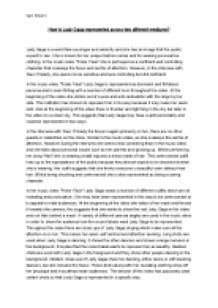 How is Lady Gaga represented across two different mediums?

﻿Sam Osborn How is Lady Gaga represented across two different mediums? Lady Gaga is a world famous singer and celebrity and she has an image that the public expect to see. She is known for her unique fashion sense and for wearing provocative clothing. In the music video ?Poker Face? she is portrayed as a confident and controlling character that is always the focus and centre of attention. However, in the interview with Paul O?Grady, she seems more sensitive and less controlling but still confident. In the music video ?Poker Face? Lady Gaga is represented as dominant and flirtatious persona and is seen flirting with a number of different men throughout the video. At the beginning of the video she climbs out of a pool and acts animalistic with the dogs by her side. The institution has chosen to represent her in his way because it may make her seem wild. Also at the beginning of the video there is thunder and lightning in the sky but later in the video it is a clear sky. This suggests that Lady Gaga may have a split personality and could be represented in two ways. ...read more.

A variety of different camera angles are used in the music video in order to show the audience how the record labels want Lady Gaga to be represented. Throughout the video there are close ups of Lady Gaga singing which make sure all the attention is on her. This makes her seem self centred and attention seeking. Long shots are used when Lady Gaga is dancing; it shows the other dancers and shows a large mansion in the background. It implies that the record label wants to represent her as wealthy. Medium shots are used with Lady Gaga in the foreground and they show other people dancing in the background. Medium close ups of Lady Gaga show her dancing, either alone or with backing dancers, but she remains the focus. These shots along with her revealing clothing show off her physique and may attract male audiences. The director of this video has purposely used certain shots so that Lady Gaga is represented in a specific way. In the interview with Paul O?Grady the artist still seems confident and comfortable but not as dominant and controlling. ...read more.

Another point from Goodwin?s theory is ?there is a relationship between lyrics and visuals?. This is demonstrated when Lady Gaga is seen playing poker and the lyrics are ?Gambling is fun when you?re with me?. These lyrics link directly to the visuals because she is seen gambling. A third point from Goodwin?s theory is ?The demands of the record label dictates the need for lots of close ups of the artist.? Lots of fast close ups are used in Poker Face and almost all of the shots during the interview are close ups of Lady Gaga. Another theory that the music video fits into is Propp?s theory of characters. Lady Gaga fits into this theory because she is the hero in the video because she is idolized by the other people in the video. A final theory that fits with Lady Gaga?s video is Blumler and Katz theory of reasons to watch media. One of the reasons why people would watch Poker Face video is to be entertained. They may like her song as her as an artist. Another reason is to socially interact with others about the video. For example they may watch it to talk about Lady Gaga?s unique and controversial outfits throughout the video. ...read more.