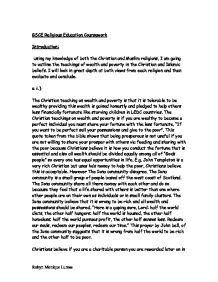 GSCE Religious Education Coursework Introduction: Using my knowledge of both the Christian and Muslim religions, I am going to outline the teachings of wealth and poverty in the Christian and Islamic beliefs. I will look in great depth at both views from each religion and then evaluate and conclude. a i.) The Christian teaching on wealth and poverty is that it is tolerable to be wealthy providing this wealth is gained honestly and pledged to help others less financially fortunate like starving children in LEDC countries. The Christian teachings on wealth and poverty is if you are wealthy to become a perfect individual you must share your fortune with the less fortunate, "If you want to be perfect sell your possessions and give to the poor", This quote taken from the bible shows that being prosperous is not useful if you are not willing to share your prosper with others via feeding and sharing with the poor because Christians believe it is how you conduct the fortune that is essential and also all wealth should be divided equally among all of "Gods people" so every one has equal opportunities in life. E.g. John Templeton is a very rich Christian but uses he's money to help the poor, Christians believe this is acceptable. ...read more.

This problem needs solving quickly and efficiently this adds to why there is a need for world development. 1.2 billion people live on less than $1 dollar a day which is equivalent to 60 pence. The MEDC countries have a responsibility to help the poor because the world needs LEDC countries to develop so that goods can be bought from the developed countries, otherwise no one's life will improve. Poverty is 'not having the minimum income level to get the necessities of life'. Poverty at its most extreme levels occurs in some of the African countries. Poverty is caused by things like natural disasters, disease, unfair trade agreements, lack of technology investment and war. Approximately 1.2 billion people in the world live on less the $1 a day and 115 millions have no access to primary education and hundreds of millions suffer from malnutrition whilst the two richest countries the USA and the UK have an obesity problem. a iii.) Christian aid is an agency based in the United Kingdom and Ireland that funds projects in some of the world's poorest countries. It helps people to improve their own lives and to tackle the causes of poverty. ...read more.

Also Allah or God may of made a in particular person rich for a reason that no one is aware of yet. Arguments against having rich people: Money made tends to be squandered E.g. rap star P.diddy's bar bill for one night amounted to �50,000. Other rich people own cars that cost more than houses. Money used for one night in a bar, or on a car could be used to feed starving children in extreme poverty. Money is also wasted on accessories like plastic surgery, drug abuse ect. These things are not essential when u consider starving children in extreme poverty. The rich become role models for ordinary people to look up to. This goes against teachings in the Quran and Bible. This causes confusion on which the true role models should be especially for young children. Businesses based in rich countries do little to help poorer countries and their only motive is to make profits. Poverty will continually increase and the situation will become worse. There needs to be fair trade rate. Also many rich people use their money to become richer. If rich people think selfishly like this more and more poverty will be caused. ?? ?? ?? ?? Robyn Monique Lumas ...read more.