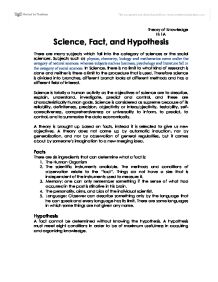 Science is totally a human activity as the objectives of science are to describe, explain, understand, investigate, predict and control, and these are characteristically human goals. Science is considered as supreme because of its reliability, definiteness, precision, objectivity or intersubjectivity, testability, self-correctiveness, comprehensiveness or universality to inform, to predict, to control, and to summarize the data economically.

A theory is brought up based on facts, instead it is selected to give us new objectives. A theory does not come up by automatic induction, nor by generalization, and nor by observation of general regularities, but it comes about by someone’s imagination to a new merging idea.

There are six ingredients that can determine what a fact is:

A fact cannot be determined without knowing the hypothesis. A hypothesis must meet eight conditions in order to be of maximum usefulness in acquiring and organizing knowledge.

I think facts play an important role in the science as without facts one cannot come up with hypothesis or ideas. For anyone to introduce a hypothesis or a new idea, he or she must have factual knowledge.

In its more restricted contemporary sense, science refers to a system of acquiring knowledge based on scientific method, and to the organized body of knowledge gained through such research. This article focuses on the more restricted use of the word. Science as discussed in this article is sometimes called experimental science to differentiate it from applied science - the application of scientific research to specific human needs - although the two are often interconnected.

Science is a continuing effort to discover and increase human knowledge and understanding through disciplined research. Using controlled methods, scientists collect observable evidence of natural or social phenomena, record measurable data relating to the observations, and analyze this information to construct theoretical explanations of how things work. The methods of scientific research include the generation of hypotheses about how phenomena work, and experimentation that tests these hypotheses under controlled conditions. Scientists are also expected to publish their information so other scientists can do similar experiments to double-check their conclusions. The results of this process enable better understanding of past events, and better ability to predict future events of the same kind as those that have been tested.

Science is a study of the physical Phenomena around us. My opinion is that science (natural sciences) are widely accepted as the superior sciences than the human sciences as the level of precision, experimentation and discovery is rigorous. Apart from that, I believe that in science, its not about what is the other's opinion. Here, more attention is paid upon logical reasoning based onour observations, inference, hypothesis and the complex methodology used in experimentation. Unlike the human science, natural science involves more detail, complexity, accuracy based on experiments conducted in a controlled environment, which in areas of the human sciences is not possible.