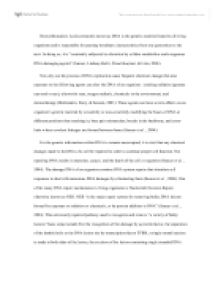 DNA Damage and Nucleotide Excision Repair. With the frequent occurrence of changes in a cell it is important to have DNA repair mechanisms like NER, to prevent mutations, cancer, and the death of the cell or organism.

Deoxyribonucleic Acid commonly known as DNA is the genetic material found in all living organisms and is responsible for passing hereditary characteristics from one generation to the next. In doing so, it is "constantly subjected to alteration by cellular metabolites and exogenous DNA-damaging agents" (Sancar, Lindsay-Boltz, �nsal-Ka�maz, & Linn, 2004). Not only can the process of DNA replication cause frequent chemical changes but also exposure to the following agents can alter the DNA of an organism: ionizing radiation (gamma rays and x-rays), ultraviolet rays, oxygen radicals, chemicals in the environment, and chemotherapy (Mullenders, Stary, & Sarasin, 2001). These agents can have severe affects on an organism's genetic material by covalently or non-covalently modifying the bases of DNA at different positions thus resulting in, base pair mismatches, breaks in the backbone, and cross-links where covalent linkages are formed between bases (Sancar et al. ...read more.

, 2004). This universally repaired pathway used to recognize and remove "a variety of bulky lesions" basic steps include first the recognition of the damage by a protein factor, the separation of the double helix at the DNA lesion site by transcription factor TFIIH, a single strand incision is made at both sides of the lesion, the excision of the lesion-containing single stranded DNA fragment is carried out, next the gap left by the DNA repair synthesis is replaced, and finally ligation of the remaining single stranded nick (Mullenders et al. , 2001). RPA, XPA, XPC, TFIIH, XPG, and XPF�ERCC1 are six repair factors used in humans to perform the task of excision repair (Sancar et al. ...read more.