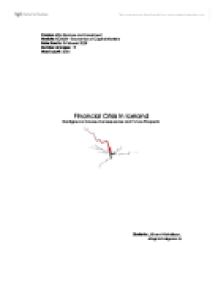 Course: MSc Finance and Investment Module: ECM04 - Economics of Capital Markets Date Due in: 2nd March 2009 Number of pages: 19 Word count: 4,261 Financial Crisis in Iceland Background, Causes, Consequences and Future Prospects Students: J�hann ��rhallsson, Magn�s Helgason & Sigurbj�rg �r Gu�mundsd�ttir Lecturer: Jens Holscher & Khaled Soufani Table of Contents Introduction 3 Background & Causes 4 European Economic Area 4 Free Capital Transfer and Privatization of the Banks 4 Speculation Capitalism in Iceland 5 Free Market Capitalism 6 The Central Bank 7 Consequences 9 Model of Financial Crisis - Iceland Comparison 11 Conclusion 14 References 15 Appendix A 17 Appendix B 18 Introduction This assignment is part of ECM04 Economics of Capital Markets module on phase 2 in MSc. Finance and Investment at University of Brighton 2008-2009. The assignment is to analyze the Icelandic financial crisis which eventually led to the collapse of the Icelandic banking system and the economy as a whole. In order to analyse the Icelandic financial crisis we will begin to look at the background and what we regard as the causes, look at the consequences and future prospects. In the end we compare the Icelandic financial crisis to a model which Kindleberger covers in his book Manias, Panics and Crashes. Kindleberger (1978) describes financial crisis in the following way: "What happens, basically, is that some event changes the economic outlook. New opportunities for profits are seized, and overdone, in ways so closely resembling irrationality as to constitute a mania. Once the excessive character of the upswing is realized, the financial system experiences a sort of "distress", in the course of which the rush to reverse the expansion process may become so precipitous as to resemble panic. In the manic phase, people of wealth or credit switch out of money or borrow to buy real or illiquid financial assets. In panic, the reverse movement takes place, from real or financial assets to money, or repayment of debt, with a crash in the prices of commodities, houses buildings, land, stocks, and bonds - in short, in whatever has been the subject of the mania." ...read more.

The central bank didn't like the collateral behind the loan and decided to nationalize the bank, by buying 75% of its equity. The government expected by that action, the credit default swap would recover, but the contrary happened and it got a lot worse. The action of nationalizing Glitnir seems to have undermined the trust of the Icelandic banking system and Icelandic government. The government and the Icelandic banks had always claimed that the banks had no liquidity problems and were in no chance of defaulting. But, by nationalizing Glitnir, that undermined the ability for the central bank to deal with the situation. (Dan�elsson & Zoega, 2009) At 16:00 on Monday 6th of October were the first minutes of the breakdown of the Icelandic banking system and the economy. Prime Minister, Geir H. Haarde, had a live speech on the national television clarifying in how bad situation the banking system was, and therefore the economy as a whole. He said: "Dear Icelanders, there is a possibility, if the worst will happen, the nation will go bankrupt...". That was the first time the public got to know that the situation of the banking system was not that good as had been indicated. The speech ended in these words: "God, bless Iceland". It was clear; the financial crisis had hit Iceland severely and, in fact, was turning into a major economic crisis. The Icelandic government agreed on a new law which allowed the government to take over any financial institution in the country. That was done in order to keep the domestic banking sector functioning in these turbulent times. The law allowed the government to create "new banks" on the ruins of the "old ones", which had domestic deposits and loans. The international activity was left over in the "old banks" and they were heading into technical bankruptcy. A common definition of a systemic crisis is when the payment system fails. ...read more.

However, we think that by entering the EEA we should have set stricter rules for institution, especially financial institutions. Supervision of the financial system should have been better as can be seen on the enormous size of the banking system in proportion of GDP. The central bank should have increased the reserve requirement for banks, but that will probably be part of discussions about changing of financial regulation all over the world in continuation of the global financial crisis. We think that the privatization can easily be criticised. In our opinion stricter rules should have been set for the ownership of the banks and foreign investors should have been participants in the ownership. It was part of the agreement, but it was never followed. It's our opinion that the directors and the owners of the banks are responsible for the collapse of the banks by gearing the banks excessively and investing rashly all over the world. However, we think that government, mainly the independence party, should take huge proportion of the responsibility. They privatized the banks and have been setting the regulations on the market. As can be seen from the background and causes of the collapse of the Icelandic banking system the regulations and supervision have been heavily lacking. It's obvious that the Icelandic central bank has failed in his role of being monetary authorities and managing high-powered money to influence the price level and real activity. In order to tackle the inflation target, interest rates were raised but without any success because of the inflow of foreign capital which increased the money supply which leads to higher inflation. We think that interest rates should have been lowered some years ago in order to prevent the increase in money supply. Next thing to do for the Icelandic government and the nation is to decide whether to join the European Union (EU) and entering in to the European Monetary Union. Although, we are not sure if Iceland should join EU because of the enormous natural resource the country has, but we think that the country needs new currency. ...read more.