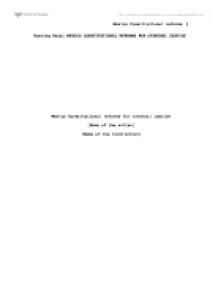 Running Head: MEXICO CONSTITUTIONAL REFORMS FOR CRIMINAL JUSTICE Mexico Constitutional reforms for criminal justice [Name of the writer] [Name of the institution] Mexico Constitutional reforms for criminal justice Introduction After suffering authoritarian regimes and blood-shedding military dictatorships in many of which human rights were seriously violated. This democratic recovery took place in a context of misery, social distress, high infant mortality, low educational levels, closed and predominantly agricultural economies, low industrial development and important external debt. The strong feeling of being facing a "re-founding" process raised debates about new institutional arrangements which were afterwards applied to procuring "better administrations" to reach optimization. The main concerns were to achieve stable governments, to consolidate the basic premises of a democratic regime and to try to achieve greater efficiency in public officials' performance. Needless to say, constitutional modifications differed according to the country. I will try to roughly point out some concerns common to these reforms and discuss and compare how Mexico's judicial system used to be before the changes with the new changes. I will then try to show the different ideals underlying those constitutional reforms, and finally draw some conclusions that will be necessarily provisional in a complex and changing context. Hypothesis Statement "The old Mexican Justice system relied more on confessions than any other form of evidence and was not efficient as the new amendments made to the old system." ...read more.

1995). It is also necessary to analyze other critical observations formulated under the circumstances of Mexico's abstention in Rome, which are supported by Mexico's traditional points of view. Alternative dispute resolution as a way of solving lesser criminal cases The disappointment to consistently hold to account officials responsible for committing abuses remains a key obstacle to the effective protection of human rights in Mexico. There have been progresses over the last decade in developing mechanisms to expose abuses and enable victims to bring complaints against officials, these have not proved sufficient to overcome impunity (Armstrong 1976). The lack of public confidence, particularly in law enforcement agencies and the judicial police was a sign of the advances required in this area. Victims of abuses have four basic opportunity for seeking remedy at the domestic level: the courts; internal disciplinary procedures; criminal investigations by the public prosecutors' offices; and complaints to the National Human Rights Commission or one of the 32 local human rights commissions Amnesty International's research shows that victims of serious human rights violations and their families have to face considerable obstacles when filing complaints and seeking justice (Amnesty International 1993). Because of some improvements in accountability mechanisms made in recent years, it became easy to challenge the legality of police conduct and force the authorities to undertake serious and impartial investigations to hold those responsible to account (Cohen 1995).Human communal rights violations, particularly those committed ...read more.

Conclusion This report highlights some of the failings and flaws in the public security and criminal justice systems that were practiced in past in Mexico. This result in human rights abuses including arbitrary detention, torture, ill-treatment, denial of due process and unfair trials, and a persistent failure to enforce existing legislation, continuing political interference in the administration of justice, and widespread impunity for those responsible for human rights abuses. The failure of Mexico's criminal justice system to ensure security or justice had been widely documented by national and international human rights organizations and academics. In my view and through the research it is evident that there was a wide recognition that the justice system is not serving society adequately and needed substantial reform to ensure effectiveness and respect for the human rights of both criminal suspects and victims of crime. However, legal reforms are an obligatory but not sufficient condition to ensure respect for human rights. The research reveals that real change depends on the efficient and unbiased application of appropriate legislation in which the protection of human rights is fully integrated. In my opinion it is time for the new federal government and legislature, as well as state governments and legislatures, to retort to the desires of Mexican society and ensure that law and practice is reformed at federal, state and municipal levels to guarantee equal access to justice and respect for human rights. ...read more.