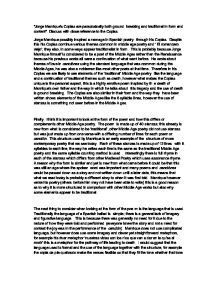 &quot;Jorge Manrique's Coplas are paradoxically both ground breaking and traditional in form and content&quot;. Discuss with close reference to the Coplas.

"Jorge Manrique's Coplas are paradoxically both ground breaking and traditional in form and content". Discuss with close reference to the Coplas. Jorge Manrique possibly inspired a new age in Spanish poetry through his Coplas. Despite this his Coplas continue various themes common in middle age poetry and 'El romancero viejo'; they also, in some ways appear traditionalist in form. This is probably because Jorge Manrique himself is considered to be a poet of the Middle Ages rather than the Renaissance because his previous works all were a continuation of what went before. He wrote about themes of love in canci�nes using the standard language that was common during the Middle Ages, he was also a nobleman like most other poets at that time. Therefore in his Coplas we are likely to see elements of the 'traditional' Middle Age poetry like the language and a continuation of traditional themes such as death, however what makes the Coplas unique is the personal aspect, this is a highly emotive poem inspired by the death of Manrique's own father and the way in which he talks about this tragedy and the use of death is ground breaking. ...read more.

Montgomery (1995) believes that the Coplas stand out for their dynamism and the frequent interchange between first and second person invokes the reader as witness to what is affirmed for example 'ved, 'dezidme'. In other medieval literature it is uncommon to have this direct involvement with the audience and I see no evidence of the use of the first person plural which is common in the Coplas. The title of the poem suggests that the central theme is death, this is true however looking more closely at the Coplas it is clear that they divide naturally into three sections, each one focuses on a different theme and there is a change of mood from the beginning of the poem to the end. The first section from stanzas 1-13 is a Dominguez (2001) pp.145 'general disquisition on the freedom of human beings to choose how they will live their lives', stanzas 14-24 shows historical figures and their choices and demise and the third section 25-39 Montgomery (1995) pp.484 'treats the virtues and triumphs of Don Rodrigo'. The first section continues a common theme of Middle Age poetry which is death and uses topoi from Medieval Death literature for example the dance of death tradition and death as the social leveller (lines 34-36 in the Coplas). ...read more.

In summary, Manrique's Coplas combine different traditional elements of the Middle Ages whilst introducing new ideas of poetry and writing. The Coplas show that Manrique was one of the leading poets of his era and the way he uses the traditional form but customises it for his Coplas and his use of rhyming and tenses shows great technical competence. His style of language which is very precise and, like in Medieval poetry, is without decoration is able flow dynamically and change tones with ease. This narrative carries the reader along and is complemented by his interaction with the reader through his use of first and second person. The Coplas can be seen to be ground breaking through the strong emotion shown by Manrique towards his father and due to the success of the Coplas and Manrique's own death this new approach to poetry, when at a time when love and humorous canci�nes were the main genre for poets, would have inspired many who looked up to Manrique as a true nobleman to copy his ideas. It is a fair conclusion that the Coplas were the epitome of Medieval poetry whilst sowing seeds of things to come. ...read more.