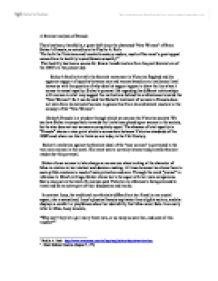 A feminist analysis of Dracula

A feminist analysis of Dracula There has been, thankfully, a great shift since the chastened "New Women" of Bram Stoker's Dracula, as noted by critic Phyllis A. Roth "For both the Victorians and twentieth century readers, much of the novel's great appeal comes from its hostility toward female sexuality"1 That hostility has been a source for female transformation from the post feminist era of the 1960's to the present day. Stoker's familiarity with the feminist movement in Victorian England and his apparent support of equality between men and woman based on an intellectual level leaves us with the question of why does his support appear to draw the line when it comes to s****l equality. Stoker's personal life regarding his different relationships with women is what may suggest the motivations behind his ambivalence towards the "New Woman". So it can be said that Stoker's treatment of women in Dracula does not stem from his hatred of women in general but from his ambivalent reaction to the concept of the "New Woman". Stoker's Dracula is a window through which we can see the Victorian society. We see how Stoker is sympathetic towards the limitations placed upon women in the society, but he also does not see women as completely equal. The absence of total equality in "Dracula" shows a view point which is somewhere between Victorian standards of the 1890's and where we like to think we are today in the 21st Century. ...read more.

Mina is also secluded from the early horrible deeds of the gentlemen heroes in the story Her equality with the men was ended when it came time for them to go and fight. It was seen as far too "dangerous" for her to take part from now on, and so for her safety she was to take no action. Also, the men took this limitation one step further. They decided amongst the group that Mina should no longer be informed and updated on what was happening as it might "frighten" her. Jonathan writes "I am truly thankful that she is to be left out of our future work, and even of our deliberations. It is too great a strain for a woman to bear. I did not think so at first but I know better now." This deprivation of Mina's power leaves her completely in the dark. This place, in the darkness, is where the Count manages to find her. The Count knows of her significance to the group, who are hunting him, "And you, like the others, would play your brain against mine. You would help these men to hunt and frustrate me in my designs!"4 In light of this the Count forces Mina to drink a part of him, his blood, and in doing so forces upon her a part of himself, in other words forces sexuality upon her. Although the men later realize their mistake in excluding Mina so she once again is informed of their plans. .".. ...read more.

At the time of Stoker's Dracula this quality in a woman would be unacceptable however not totally unappreciated by the male imagination. "Dracula has many scenes that seem to revel in s****l language and sensual description; these pleasures are of course sublimated to a Victorian sense of morality"14. s****l energy, in Stoker's view, has great potential for evil, but part of the novel's trick is that Stoker is allowed to express this s****l energy without the repercussions of doing just that. In other words writing a novel that implicitly conflates sin with sexuality in a moralizing way, Stoker is also given free reign to write incredibly lurid and sensual scenes. This is his deceptive means of representing a society with feminist equality and any female who breaks the boundaries of desire will inevitably become part of the undead in order to restore innocence and decorum. However his allowance to portray woman as s****l in the first place and his generous portrayal of Mina throughout the novel spark a light for feminist readers and in turn start the development of the feminist era. 1 Phyllis A. Roth http://www.wwnorton.com/college/english/nce/drac/overview.htm 2 . Bram Stokers Dracula (chapter 5, 175) 3 Bram Stokers Dracula (Page 106) 4 Bram stokers Dracula chapter 21 5 Bram stokers Dracula chapter 21 pg2 6 http://www.newi.ac.uk/rdover/other/dracula_.htm 7 http://www.cooo.net/fc/25/i.php 8 http://www.dagonbytes.com/vampires/dracula/brom/chapter23.htm 9 http://courses.nus.edu.sg/course/ellgohbh/3202a.html Bram Stokers Dracula chapter 22 pg 3 11 Bram Stokers Dracula chapter 3 12 Bram stokers Dracula chapter 26 http://www.sparknotes.com/lit/dracula/themes.html 14 http://www.ellopos.net/dickens/copper_daiches.html ?? ?? ?? ?? ...read more.