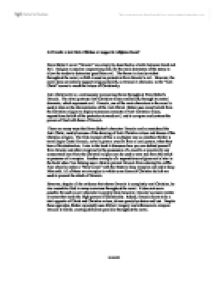 Is Dracula a text that criticises or supports religious ideas?

Is Dracula a text that criticises or supports religious ideas? Bram Stoker's novel "Dracula" can simply be described as a battle between Good and Evil. Religion is used as a separation point, for the main characters of the story, to allow the reader to determine good from evil. The theme is clearly evident throughout the novel, as faith is used as protection from Dracula's evil. However, the novel does not entirely support religious beliefs, as Dracula's character, as the "Anti-Christ" seems to mock the values of Christianity. Anti-Christianity is a continuously reoccurring theme throughout Bram Stoker's Dracula. The novel portrays Anti-Christian values and beliefs, through its central character, which represents evil. Dracula, one of the main characters in the novel is used to take on the characteristics of the Anti-Christ. Stoker uses many beliefs from the Christian religion to display numerous amounts of Anti-Christian values, superstitious beliefs of the protection towards evil, and to compare and contrast the powers of God with those of Dracula. There are many ways that Bram Stoker's character Dracula can be considered the Anti-Christ, mostly because of the showing of Anti-Christian values and abuses of the Christian religion. ...read more.

By this, Dracula is relying on humans to restore his life after death and not concentrating on God as the source of life, hence the reason why Dracula becomes more youthful, after each of his victims. Dracula is also portrayed as the Anti-Christ by having similarities with Jesus but in evil ways. As Dracula feeds on the blood of the living he creates followers as Jesus had disciples. Throughout the book several times, normally while Renfield (one of his followers or "disciples") is speaking, when Dracula is referred to the pronoun is capitalized, as Christians would do when referring to God. Stoker continues his mocking comparisons with Dracula's voyage of England. Just as Jesus quieted the storm while he was a sea with his disciples, Dracula controls the weather and creates a massive storm to aid his arrival at the harbour. The supernatural characteristics that link the storms appearance to Dracula's arrival are described in a newspaper clipping from the Dailygraph. "Then without warning the tempest broke. With a rapidity which, at the time seemed incredible, and even afterwards impossible to realize, the whole aspect of nature at once became convulsed." ...read more.

Stoker's next and most critical comparison comes with the drinking of Dracula's blood by Mina. In what Professor Van Helsing describes as a "terrible baptism of blood", the vampire hunters witness Mina being forced to drink Dracula's blood in a scene that is smothered in Christian imagery. In Mina's recollection of the scene to the vampire hunters, she quotes Dracula's words to her saying, "And you, their best beloved one, are now to me, flesh of my flesh; blood of my blood; kin of my kin". This scene makes reference to the biblical creation of the woman in which Adam says this is now bone of my bone, and flesh of my flesh. Using this comparison, Stoker suggests that in turning Mina into a vampire, Dracula is symbolically recreating her in his own image. The death of Dracula was very symbolic religiously, as he becomes dust as he is defeated. This is important because turning into dust represents Christian freedom in death and frees him from his evil ways. Bram Stoker's Dracula emphasizes role of Christianity against Dracula's Anti-Christian presence. The "death" of the Count seems rather inconclusive, but as the reader, we are fully aware that the power of Christianity/faith has overcome Dracula in this novel, despite the parallels that He has shown towards the Christian religion. ...read more.