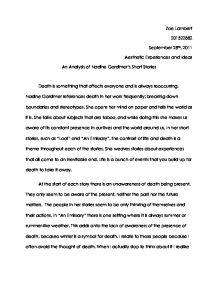 Zoe Lambert 201322882 September 28th, 2011 Aesthetic Experiences and Ideas An Analysis of Nadine Gordimer's Short Stories Death is something that affects everyone and is always reoccurring. Nadine Gordimer references death in her work frequently; breaking down boundaries and stereotypes. She opens her mind on paper and tells the world as it is. She talks about subjects that are taboo, and while doing this she makes us aware of its constant presence in our lives and the world around us. In her short stories, such as "Loot" and "An Emissary", the contrast of life and death is a theme throughout each of the stories. She weaves stories about experiences that all come to an inevitable end. Life is a bunch of events that you build up for death to take it away. At the start of each story there is an unawareness of death being present. They only seem to be aware of the present, neither the past nor the future matters. The people in her stories seem to be only thinking of themselves and their actions. ...read more.

This drive for possessing more inevitably brought them to their end. I noticed that in the middle of the story the characters go through realizations of their own. In the story "Loot", the man who the writer was speculating found a mirror. I think this symbolism self reflection and realization. I think that character was trying to collect all these things because he was trying to lose himself. In the end, when he picked up the mirror, he found that what he was looking for is what he has been trying to avoid all this time. It's rather tragic that Nadine Gordimer decides to kill off this poor man that has just found self fulfillment. Her unconventional way of writing makes you unravel your brain and reflect upon things that you thought you knew. Nadine Gordminer put experiences in to perspective, with situations that have never occurred to you before. In the story "An Emissary", there is the realization of death in the most peculiar situation. The characters notice death when they are in an intimate situation. ...read more.

It made me look at life in a different perspective. Nadine, as well, made me rethink what a short story is. I thought that short story was like a little story. However, she showed me that it is a reflection of another person's experiences. It doesn't have a good ending and unexpected things happen throughout it - just like how life is. The definition I currently think of as a short story is that it is a little tidbit of life depicted on a piece of paper. A short story can teach us about things we feel and things we could have not understood before. The perspective of death has even changed for me. Now it is not necessarily a bad thing but a thing that I need to accept is going to happen. It really opened up how death can happen at any time, no matter the circumstances. Her stories made me think about what I have in life and what I should cherish. She also showed that every story has many sides and no one in the end is absolutely right. Her stories and the way her writing reflects on society today, makes the reader understand more about the world around him/her and propels him/her towards self fulfillment. ...read more.