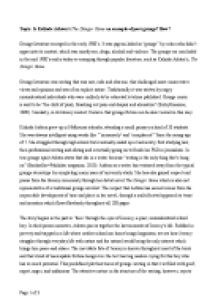 Is Kalinda Ashtons The Danger Game an example of post-grunge? How?

﻿Topic: Is Kalinda Ashton?s The Danger Game an example of post-grunge? How? Grunge literature emerged in the early 1980?s. It was pigeon-holed as ?grunge? by critics who didn?t appreciate its content, which was mostly s*x, drugs, alcohol and violence. The grunge era concluded in the mid 1980?s and is today re-emerging through popular literature, such as Kalinda Ashton?s, The Danger Game. Grunge literature was writing that was raw, rude and obscene, that challenged most conservative views and opinions and was of an explicit nature. Traditionally it was written by angry misunderstood individuals who were unlikely to be educated let alone published. Grunge music is said to be ?the child of punk, thrashing out pain and despair and alienation? (Eurhythmaniac, 2009). Similarly, in its literary context I believe that grunge fiction can be also viewed in this way. Kalinda Ashton grew up in Melbourne suburbs, attending a small primary school of 20 students. She was always intelligent using words like ??immensely? and ?complacent?? from the young age of 7. She struggled through high school but eventually ended up at university; first studying law, then professional writing and editing and eventually going on to finish her PhD in journalism. ...read more.

The inevitable fate of Jeremy is known throughout most of the book and that cloud of inescapable fortune hangs over the text leaving readers crying for this boy who has so much potential. This predefined plot has traces of grunge writing in that it is filled with grief, regret, anger, and unfairness. The attractive nature in the structure of the writing, however, rejects typical grunge writing structure which is bluntly to the point and uncreative in all meanings of the word. Ashton continues to weave grunge elements into the characters Louise and Alice. Louise is a compulsive liar and a drug addict who is obsessive in the journey to discover what happened on the night of the fire and obsessive in her risk taking behavior (i.e. The Danger Game). Alice's drug addiction is portrayed through a second person account which can at times make the reader feel like they are the ones looking through Louise's eyes, thus helping us understand and relate to the actions Louise takes and the feelings of fear, confusion, obsession and anger which embodies her character. ...read more.

Alice believes that although she has spent many years getting an education to escape her disadvantaged past, the underperforming public school she works at is now being shut down leaving her with no job security and no confidence in the officials? which are supposed to be supporting and protecting her and the other members of staff. In the background of this subplot, we follow Alice through her s****l encounters with married man Jon and her s****l experimentation with her best friend Sarah. Although these themes are not what would be written by a conservative writer, but rather a grunge writer, the way in which Ashton has told these stories is in a tasteful and less crude manner than traditional grunge writing. In conclusion it is obvious that Ashton is not a grunge writer. Her eloquent story telling is far from the telltale signs of a grunge novel such as crude, to the point, in your face style of writing. However the themes and some vocabulary (swear words) are elements that ensure us that Ashton may have been influenced by this genre. Whether intentional or unintended the collaboration of grunge features along with the story telling skills of an educated and highly gifted writer has produced an entertaining and eye opening post-grunge novel. ...read more.