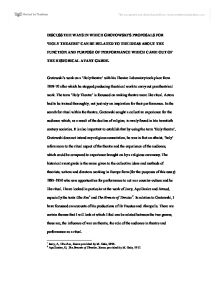 Discuss the ways in which Grotowski's proposals for 'Holy Theatre' can be related to the ideas about the function and purpose of performance which came out of the historical avant garde.

DISCUSS THE WAYS IN WHICH GROTOWSKI'S PROPOSALS FOR 'HOLY THEATRE' CAN BE RELATED TO THE IDEAS ABOUT THE FUNCTION AND PURPOSE OF PERFORMANCE WHICH CAME OUT OF THE HISTORICAL AVANT GARDE. Grotowski's work on a 'Holy theatre' with his Theatre Laboratory took place from 1959-70 after which he stopped producing theatrical work to carry out paratheatrical work. The term 'Holy Theatre' is focussed on making theatre more like ritual. Actors had to be trained thoroughly, not just rely on inspiration for their performance. In the search for ritual within the theatre, Grotowski sought a collective experience for the audience which, as a result of the decline of religion, is rarely found in late twentieth century societies. It is also important to establish that by using the term 'Holy theatre', Grotowski does not intend any religious connotation, he was in fact an atheist, 'holy' refers more to the ritual aspect of the theatre and the experience of the audience, which could be compared to experience brought on by a religious ceremony. The historical avant garde is the name given to the collective ideas and methods of theorists, writers and directors working in Europe from (for the purposes of this essay) 1895-1930 who saw opportunities for performance to act as a counter-culture and be like ritual. I have looked in particular at the work of Jarry, Apollinaire and Artaud, especially the texts Ubu Rex1 and The Breasts of Tiresias2. In relation to Grotowski, I have focussed on accounts of his productions of Dr Faustus and Akropolis. There are certain themes that I will look at which I feel can be related between the two genres, these are; the influence of war on theatre, the role of the audience in theatre and performance as a ritual. ...read more.

not general but directed towards a search for the truth about himself and his mission in life"7 I feel that this quote shows how Grotowski saw the importance of audience members in the act of ritual within theatre, and that the whole act was perhaps more for the benefit of the spectator than the actor or director. The historical avant garde was developing work immediately before, during and after World War One. I feel that this had a huge affect on their views of theatre and its function and purpose. Apollinaire was directly affected by the war as he was injured. Grotowski was hugely affected by the Second World War as he fled a Polish village after it had been invaded by the Nazis. Young men working in Europe during the First World War, like Apollinaire and Artaud, were aware of their own mortality as thousands upon thousands of their compatriots were killed in the trenches. To develop a counter-culture within theatre showed the world that these young men did not agree with the practices of those who had gone before and those who were responsible for starting the war that killed so many of their friends. In my reading of the topic, I have not found an example of avant garde drama written during or immediately after the war which conveys this feeling as clearly as Grotowski's Akropolis does for World War Two. However, I do think that it is important that Apollinaire and the Surrealists 'rediscovered' Jarry's Ubu Rex around 19168. Apollinaire saw Jarry as the forerunner of all the artists who "rejected traditional forms as the false images of a universe demonstrably lacking both system and purpose" and expressed "the full implications of an irrational ...read more.