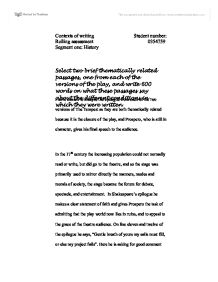 The Tempest - Select two brief thematically related passages, one from each of the versions of the play, and write 600 words on what these passages say about the different conditions in which they were written.

Contexts of writing Student number: Rolling assessment 0354759 Segment one: History Select two brief thematically related passages, one from each of the versions of the play, and write 600 words on what these passages say about the different conditions in which they were written. I have chosen to analyse the epilogue from each of the two versions of The Tempest as they are both thematically related because it is the closure of the play, and Prospero, who is still in character, gives his final speech to the audience. In the 17th century the increasing population could not normally read or write, but did go to the theatre, and so the stage was primarily used to mirror directly the manners, modes and morals of society, the stage became the forum for debate, spectacle, and entertainment. ...read more.

When the theatres opened again some two years later, the public were probably slow in returning to the theatre. So gaining a theatre audience when the audience was ever decreasing would have been a difficult and worrying time. At the time when this play was written the interclass mobility naturally created by the rise and fall of families meant that the class structure was breaking down, and so Shakespeare gives in his epilogue the emphasis upon loss and recovery, art and nature, and the sense of order. The theatre of restoration was quite different from Shakespeare's theatre, with the audience now largely upper class. Dryden directly links his epilogue to the past and present topics of the time. ...read more.

The long decline in English theatre production since 1620 wasn't helped by extreme Puritan moralistic pressure that resulted in the long parliament putting an end to theatrical performances in 1642. In 1665, during the great plague, there was enforced theatrical inactivity, and just a year later the great fire of London took place. This could be the reason why Dryden talks of ill poets and the ghosts of poets in his epilogue, and why he wrote that sixty-seven was a very damning year. At the end of the epilogue, Dryden, like Shakespeare is making an appeal to his audience, asking for them to be gracious to the pen. The lingering uncertainty of their art meant that in this period, as in others literature was an index to the health of the society that fostered it. 2 ...read more.