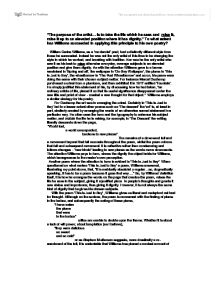 &quot;The purpose of the artist... is to take the life which he sees and raise it, raise it up to an elevated position where it has dignity.&quot; To what extent has Williams succeeded in applying this principle to his own poetry?

"The purpose of the artist... is to take the life which he sees and raise it, raise it up to an elevated position where it has dignity." To what extent has Williams succeeded in applying this principle to his own poetry? William Carlos Williams, as a 'modernist' poet, had a distinctly different style from those he succeeded. Indeed he was not the only artist of this time to be changing the style in which he worked, and breaking with tradition. Nor was he the only artist who saw it as his task to raise otherwise everyday, average subjects to an elevated position and give them dignity. As with the attention Williams gave to a barren wasteland in 'Spring and all', the wallpaper in 'On Gay Wallpaper', the plums in 'This is Just to Say', the wheelbarrow in 'The Red Wheelbarrow' and so on, his peers were doing the same with their chosen subject matter. For instance Marcel Duchamp purchased a urinal from a plumbers, and then exhibited it in 1917 entitled 'Fountain'. He simply justified this statement of his, by discussing how he had taken, "an ordinary article of life, placed it so that its useful significance disappeared under the new title and point of view - created a new thought for that object." ...read more.

However, this is entirely consistent with the modern art movement of the time, the throwing out of old traditions and experimenting with new approaches. Although minimal, the content gives us something to ponder and envisage and surpasses the otherwise day-to-day and normal associations with the subject matter. The poem typifies Wallace Stevens' opinion of Williams that he "has spent his life rejecting the accepted sense of things". This could certainly account for his choice of subject matter and ideas on what makes a poem a poem. It also demonstrates his disdain for inessential words and his sparing attitude towards description and open praise for his subject matter. He was certainly amongst other things an enthusiast on what he wrote about, which also gives otherwise commonplace objects some of the dignity Williams obviously believed they deserve. This quality also highlights how Williams sees no need to over complicate the subject. In holding back on the description, Williams displays how he doesn't need to convince us that Wallpaper, or plums, or Christmas decorations are worthy of our attention. He rejects a method often employed by poets, to drum up the subject matter with extravagant, unnecessary description and thus displays how dignified his subjects are without embellishment or romanticising. ...read more.

Although the subject matter seems at first simple - a description of a wallpapered room, Williams has used the wallpaper as a tool, making his philosophy accessible to all through the common object. It is because of this new importance that the wallpaper now holds that it has gained dignity in what it is, even though Williams is far from praising it. By placing it in such an insightful poem, Williams has been raised from the life that Williams took it from. Not only do I agree that the purpose of the artist is to raise the life that he sees, and give it dignity, but I also agree that Williams achieves this with much of his poetry convincingly. The examples above also display the array of techniques Williams uses to achieve this. The expanse between the subject matter and the theme the poem deals with, the minimal description, the sparing approach to words and the arranging of words that would otherwise feel everyday are all employed by Williams and evident as techniques that elevates the everyday and give it new dignity. ...read more.