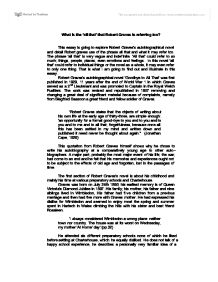 What is the 'all that' that Robert Graves is referring too?

What is the 'all that' that Robert Graves is referring too? This essay is going to explore Robert Graves's autobiographical novel and detail Robert graves use of the phrase all that and what it may refer too. The phrase 'all that' is very vague and indefinite. 'All that' could refer to so much; things, people, places, even emotions and feelings. In this novel 'all that' could refer to individual things or the novel as a whole, it may even refer to only one thing. That is what I am going to find out and illustrate in this essay. Robert Graves's autobiographical novel 'Goodbye to All That' was first published in 1929, 11 years after the end of World War 1 in which Graves served as a 2nd Lieutenant and was promoted to Captain in the Royal Welch Fusiliers. The work was revised and republished in 1957 removing and changing a great deal of significant material because of complaints, namely from Siegfried Sassoon a great friend and fellow soldier of Graves. 'Robert Graves states that the objects of writing about his own life at the early age of thirty-three, are simple enough: 'an opportunity for a formal good-bye to you and to you and to you and to me and to all that; forgetfulness, because once all this has been settled in my mind and written down and published it need never be thought about again.'' ...read more.

Later on his writing about trench life becomes more candid, authorities would have found this controversial at the time; soldiers were not allowed to keep diaries or write home about the conditions in trenches. Graves talks warmly of his companions in the trenches mentioning many by name, but deaths and wounds seem inconsequential after time; 'One can joke with a badly wounded man and congratulate him on being out of it. One can disregard a dead man. But even a miner can't make a joke that sounds like a joke over a man who takes three hours to die, after the top part of his head has been taken off by a bullet fired at twenty yards' range' (pp.118) Graves talks of pessimism breeding superstition and of strange coincidences in the trenches, for example his predecessor having predicted his own death and Graves himself managing to miss a shell literally by seconds. Graves had an unpleasant but uneventful time in the second battalion of the Royal Welch Fusiliers; the commanding officers were unlikeable and superior. Younger officers such as Graves were referred to as 'warts' and were advised to keep quiet and were not allowed to drink whisky. Graves was wounded by shell-fire and sent home in summer 1916 he was originally thought and reported to have died. ...read more.

He did not want to have to go through his worst times in his mind again so he gave them to someone else to worry about; his readers! Graves's early life was so dramatic and so utterly emotional; he lost all hope in humanity, especially in England hence his move to Majorca. Where he married again, had four more children and ended his days a much happier man than he had been in his youth. Despite the great amount of war novels that appeared before 1930 none are as famous or as greatly acclaimed for their honesty as Goodbye to All That. The impact this novel has had on readers for decades has given people a vision of the war that was so terrible, it distressed not only Robert Graves but so many of the people involved and plagued many of them for the remainder of their lives. Goodbye to All That' was Robert Graves way of coming to terms with his life experiences, an opportunity that few people had. It was his chance to say leave them behind and say Goodbye, to everything, to his previous life, to all that. Reference List Robert Graves (1929) Goodbye to All That. London: Penguin books. Robert Graves cited by Richard Perceval Graves (1995) Goodbye to All That: Introduction; a biographical essay. Available from: http://books.google.co.uk/books?id=TMRVO4AKyWEC&pg=PP17&lpg=PP17&dq=goodbye+to+all+that+jonathan+cape&source=bl&ots=yMd4rZby4o&sig=chWzDvMTaDW88bY_hUG3ubiE6pQ&hl=en&ei=8pUMSuDjLs6Y-gbc7627Bg&sa=X&oi=book_result&ct=result&resnum=2#PPP13,M1 (Accessed on 14th May 2009) ...read more.