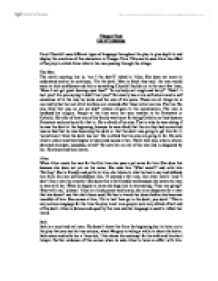 Vinegar Tom Use of Language Caryl Churchill uses different types of language throughout the play to give depth to and display the emotions of the characters in Vinegar Tom. This can be seen from the offset of the play in which Alice talks to the man passing through the village. The Man The man's opening line is; 'am I the devil?' asked to Alice. She does not seem to understand and so he continues, 'I'm the devil. Man in black they say,' the man would seem to lack confidence and this is something Churchill builds on in the next few lines; 'Have I not got great burning eyes then?' 'Is my body not rough and hairy?' 'Didn't it hurt you? Are you saying it didn't hurt you?' He clearly has a low self esteem and is self conscious of in the way he looks and the size of his penis. These are all things he is worried by but the root of all his fears are revealed after these initial worries. The line 'So you think that was no sin we did?' ...read more.

She is friendly and polite to him, she listens to what he has to say and defends him from his own self confidence like; 'It seemed a fair size, like other men's.' and 'I don't like a man too smooth.' She does this to be friendly and because she wants the man to stay with her. When he begins to leave she begs him to stay saying, 'Your not going?' 'Stay with me,' 'please.' Alice is a kind person and lonely, she is so desperate for a man that she doesn't see that she's been used. He has to knock her down before she becomes resentful of him. She curses at him, 'Go to hell then go to the devil, you devil.' This is very serious language for the time the play is set in as people were very afraid of hell and of the devil. Alice is furious and upset by the man and her language is used to reflect her mood. Jack Jack is a cruel and evil man. He doesn't show this from the beginning but its latter on in the play that you see his true colours; when Margery is taking a while to churn the butter. ...read more.

Joan Joan plays the act of an old sweet woman trying to get attention, yet when she is provoked she can be as spiteful and wicked as a witch and has a foul tongue. Examples of these two sides to her personality can be seen when she visits Margery in the barn in scene five and asks for some yeast. At first she is as Jack is in scene five with Alice trying to get sympathy 'A small crumb of yeast and God will bless you for your kindness to your poor old neighbour.' Yet when she receives none and Margery is a little rude to her she responds by cursing her and saying; 'Devil take you and your man and your yeast and your beer and your bread and your cider and your cold face...' and she would have continued if she wasn't cut short by Margery. The way she starts of by talking of blessings from God to cursing from the devil shows the two sides of Joan's personality, she is in fact a poor old woman, but she is so bitter by that that she curses and swears like a witch which is what gets her hanged in the end. Oliver Jewell ...read more.