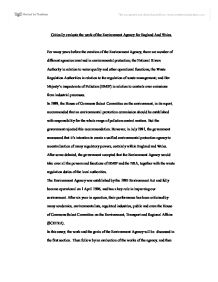 Critically evaluate the work of the Environment Agency for England And Wales.

Critically evaluate the work of the Environment Agency for England And Wales. For many years before the creation of the Environment Agency, there are number of different agencies involved in environmental protection; the National Rivers Authority in relation to water quality and other operational functions; the Waste Regulation Authorities in relation to the regulation of waste management; and Her Majesty's inspectorate of Pollution (HMIP) in relation to controls over emissions from industrial processes. In 1989, the House of Commons Select Committee on the environment, in its report, recommended that an environmental protection commission should be established with responsibility for the whole range of pollution control matters. But the government rejected this recommendation. However, in July 1991, the government announced that it's intention to create a unified environmental protection agency to recentralisation of many regulatory powers, certainly within England and Wales. After some debated, the government accepted that the Environment Agency would take over all the powers and functions of HMIP and the NRA, together with the waste regulation duties of the local authorities. The Environment Agency was established by the 1995 Environment Act and fully became operational on 1 April 1996, and has a key role in improving our environment. ...read more.

'Too many managers spend too much time jostling for power and feathering their nest and non-productive meetings.'4 Bell and Gray suggested that because the agency' employees are mainly from pre-existing department: HMIP, NRA and other 83 Waste Regulation Authorities. They had different regulatory styles, worked within different scientific traditions. As these people work together, it will create conflict and competition within the agency. The other area of criticism is more focus on the agency regulatory role. From industry the main criticism was that the agency was inefficient: slow, inconsistent, expensive and opaque. Bell and Gray (2002) suggest that this failure was caused by poor and inappropriate management systems and inadequate legislation. There are many criticisms about the fairness of the agency when it comes to enforcement. In 1990 -2000, there are 342 prosecutions in waste management and 22 prosecutions in IPC sector.5 The annual prosecution rate suggested that with waste management companies facing an apparently higher risk of prosecution than IPC operators. A study from De Prez (2001) argued that the environment agency has two different approaches to enforcement in waste management and IPC in particular which best highlight the notion of 'bottom heavy' enforcement. ...read more.