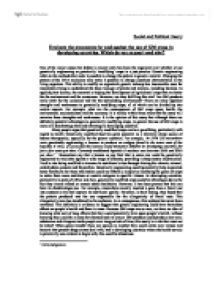 Evaluate the arguments for and against the use of GM crops in developing countries. Which do you support and why?

Social and Political theory Evaluate the arguments for and against the use of GM crops in developing countries. Which do you support and why? One of the major causes for debate in recent years has been the argument over whether or not genetically engineering or genetically 'modifying' crops is a just practice. Genetic engineering refers to the methods that make it possible to change the pattern in genetic material. Changing the pattern of the DNA molecules may make it possible to change countless characteristics in the living organism. This ability to modify an organism's genetic makeup has innumerable uses for researchers trying to understand the basic biology of plants and animals, including humans. In applied plant science, the research is helping the development of agricultural crops that are better for the environment and for consumers. However, are they fulfilling this aim? Are GM products really safer for the consumer and for the surrounding environment? There are many apparent strengths and weaknesses to genetically modifying crops, all of which can be divided up into certain aspects. For example, what are the consequences of GM crops upon; health, the environment, society/culture and the economy. It is mainly within these areas that the essay will examine these strengths and weaknesses. It is the opinion of this essay that although there are definitely potential advantages to genetically modifying crops, in general the use of GM crops is more of a disadvantage than and advantage to developing countries. ...read more.

When genes transfer from one species to another they could create new viruses and bacteria that present drugs cannot deal with, and in developing countries where the health service is practically non-existent to begin with, this could be disastrous. Aside from health benefits, people argue that genetic modification is a good thing simply because better products can be made, that food can be improved through making the process of producing them easier for the farmer or grower. This improvement could come through providing the plant with pest and disease resistance or increasing crop tolerance to a wider range of climates, or making the food more attractive to the consumer. Crops are difficult to raise for many reasons, for example strawberries are not very frost hardy which makes them difficult to grow in certain climates. However 'a few years ago researchers discovered that the Arctic flounder produces an anti freeze to protect itself in arctic waters. Research is now underway to introduce the anti freeze gene into fruits and vegetables like strawberries and Soya beans which can be damaged or destroyed by frost.' 2 This could be beneficial to developing countries as they often have harsh climates with little rainfall and infertile soil. Genetic modification could encourage crops to grow where they would not grow before, providing these countries with more food. ...read more.

3 Currently conventional breeding can take decades to produce the right characteristics in a crop whereas the same result can be matched in a matter of years using gene technology. For growers, genetic resistance to herbicides, pests and diseases will mean reduced management costs thus increasing profitability in a climate of decreasing margins of return. But is this a good thing? Genetic engineering could produce monopolistic practices and would create a lot of competitiveness. Companies would try and out do each other by trying to create the cheapest kinds of crop. This could mean that the quality of the crop could decrease. In conclusion, it would be impossible to say that there are clear-cut answers to this question as there are both advantages and disadvantages of genetically modifying crops in developing countries. For example, although GM crops could be easier to grow in the infertile soils of Africa and Asia, thus providing more food, there is no guarantee that these crops won't cause serious damage to people's health and to the environment. Scientists cannot yet say whether or not GM crops are safe, simply because they don't know. It therefore seems clear that if people's health is at risk, that should be the most important factor, showing that GM crops are more of a disadvantage than an advantage. However, if it can be proven that Genetically modifying crops is safe to people and to the environment, this opinion would probably be reversed. 1 www.maf.govt.nz 2 www.maf.govt.nz 3 www.agresearch.co.nz ...read more.