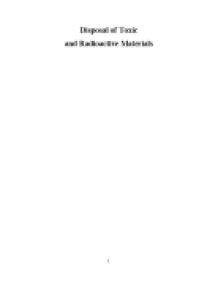 ﻿Disposal of Toxic and Radioactive Materials ________________ Abstract: Toxic and Radioactive waste materials has been brought to life by humans being a by-product of numerous undertaking efforts ever since the breakthrough discovery of radioactivity in 1896 by Antoine Henri Becquerel. Since World War II, toxic, as well as radioactive waste materials have been produced by army weaponry manufacturing and screening; exploration; electrical energy generation; healthcare analysis and therapy; biological and chemical research; along with other commercial uses. Because of the hazardus and fatal biological effects of radiation and toxins to humans, the governments of different countries have developed ways on managing these waste products in order to avoid contamination. The four types of toxic wastes (very-low level waste, low-level waste, intermediate level waste, and high-level waste) all have specific techniques for proper disposal - the methods increasing in level in proportion to the radiation degree or severity of effects. There are also secure solutions to the disposal of used fuel and those from nuclear power plants. These methods include burying them underground or placing them in a waste storage pond. This research will focus on the Philippine conditions regarding the issue on toxic wastes as well as provide an international overview on the process and procedures observed from radioactive products. The importance of these measures can be attributed from the effect that safety has on both the environment and the community. Without these, the human race and every living thing would helplessly pass away from cancer-related diseases without having any definite cure. The prevention should not only start from the authorities but also from the responsibility that each individual has been given in order to fully resolve this significant issue. ________________ Discussion and Explanation: Nuclear energy stands out as one of the few energy-producing technological innovations which calls for maximum accountability for all its waste products and completely charges this into the resulting product or service (e.a. ...read more.

Either way, the total amount is small ? as mentioned previously, an average reactor produces around 27 tonnes of used up fuel or 3 m3 per annum of vitrified waste. The two are usually properly and economically isolated, and have been managed and stored securely ever since nuclear energy started off. Safe-keeping is mainly in ponds at reactor sites, or from time to time at a main site. 90% of the planet's used fuel is kept as mentioned and a certain number of it has been there for many years. The ponds are at the very least 7 meters deep, to permit a minimum of 3 meters of water above the used fuel to completely safeguard it. It is cooled also by the water around it. Several storage of fuel assemblies that have been cooling down ponds for no less than 5 years is in dried up casks or vaults with air flow inside of cement sheltering. If used reactor fuel fails to undergo reprocessing, it will continue to consist of all the highly radioactive isotopes, after which the whole fuel assembly is handled as HLW for immediate disposal. It as well produces a great deal of heat and calls for cooling. Nevertheless, because it generally is made of uranium, it signifies a possibly beneficial resource and there exists a growing disinclination to eliminate it. Following storage for around 40 years the used fuel assemblies are set for encapsulation or packing into casks prepared for long safe-keeping or permanent subterranean disposal. Immediate removal of used fuel has been selected by the United States and Sweden and the like, whilewhilst changing ideas lean in the direction of making it recoverable if future decades view it as a powerful resource. This implies permitting a time of administration and supervision before a repository is closed downshut down. Disposal of used fuel and other HLW To make certain that no substantial environmental releases take place throughout thousands of years, 'multiple barrier' geological disposal is projected. ...read more.

ideal usage of lands and mineral deposits; (3) community fairness and effectiveness in resource usage; and, (4) efficient environmental administration. To accomplish its objective, the DENR recognized particular tactical issues and suggested an overall of 127 projects priced at nearly US$3.38 billion. Most of the suggested investing is designated for the therapy of degraded ecosystems, largely including forestry-related venturesundertakings. The metropolitan and commercial ecological issues are listed relatively on decreased priority. Merely eight of the DENR's suggested projects immediately work with industrial toxins. Many include performing research on particular areas of industrial contamination. The price of these eight projects is approximated at US$12.25 million, addressing basically 0.36 percent of overall DENR planned project expenses. From these facts can we highlight the importance of these disposal methods and how they should be observed accordingly. In the next paragraph, the solutions and suggestions to prevent and improve the current situation of the Philippines regarding its disposal of toxic materials would be discussed. What has to be done: Government accomplishes its role by setting standards and ammending laws such as the Republic Act No. (RA) 6969 to prevent and decrease as much as possible the cases related to toxic and radioactive materials, but after imposing these set of rules, the government like in the Philippines for instance, become lenient and tie down their defences thinking that the countrymen would follow all the rules accordingly. This belief is incorrect and must be overwritten by organizing proper mass campaigns regarding radioactivity and toxic wastes. The government should learn to be strict in imposing these regulations and announce reminders just allow waste establishments to observe proper disposal. Cooperation is key between the coutrymen and the government to ensure smooth workflow. Examples of this could include proper disposal of materials containing mercury such as batteries and thermometers by locating them to proper segregation bins. Radioactivity and the spread of harmful toxins should be treated as a major issue considering the increasing damage it is causing every year. Everyone must take responsibility and act as one, otherwise it would be to the detriment of the human race. ...read more.