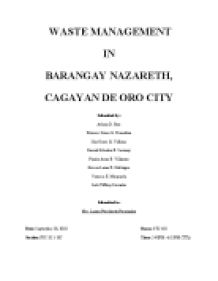 This Community Research Project is aimed at examining Barangay Nazareths waste management system in the city of Cagayan de Oro.

﻿WASTE MANAGEMENT IN BARANGAY NAZARETH, CAGAYAN DE ORO CITY Submitted by: Achaia D. Bais Princess Grace G. Esmedina Isha Grace Q. Vallinas Karrah Kshatria B. Seronay Prairie Anne B. Villamor Krissie Laine R. Odchigue Vanessa E. Mosqueda Irish Tiffany Cornelio Submitted to: Mrs. Laarni Presidente-Pacamalan Date: September 28, 2010 Room: STC 401 Section: PSC 10.1- BC Time: 5:40PM ?6:55PM (TTh) Rationale/Background of the Study Historically, the amount of wastes generated by human population was insignificant mainly due to the low population densities, coupled with the fact there was very little exploitation of natural resources. Common wastes produced during the early ages were mainly ashes and human & biodegradable wastes, and these were released back into the ground locally, with minimal environmental impact. With the advent of industrial revolution, waste management became a critical issue. This was due to the increase in population and the massive migration of people to industrial towns and cities from rural areas during the 18th century. There was a consequent increase in industrial and domestic wastes posing threat to human health and environment. The increasing industrialization and fast growth does not only pose problems related to the allocation of resources and powers, but also severely challenges the natural environment. Environmental degradation such as contaminated water, sinking groundwater levels, unhealthy soils, and polluted air has become a harsh reality in many parts of India. Noteworthy, a damaged local environment hits the most vulnerable groups of society the hardest. Poor and marginalized people lack the resources needed to reduce the negative effects of a degraded environment. At the same time, they are usually directly dependent on their close natural environment for their daily survival. One result of a rapid urbanization, a slowly reducing gap between urban and rural, changing consumption patterns, and a growing population is the problem of waste. Waste can take many forms. It may be solid, liquid, gas, or in some cases radioactive. ...read more.

Community - Waste Management is committed to enhancing our communities through programs that help make them cleaner and better places to live. Local Waste Management facilities are proactive in identifying charities located in the immediate community that they serve and in many cases may have predetermined which organizations they will be supporting that year. Archeological evidence said that humans had a way of managing their waste even before landfills and incinerators were developed. In many archeological sites, dumping pits were discovered where early people were believed to throw in their waste. In the course of history, waste regulations were enacted. This suggests that waste management is not a modern principle but in fact a natural response to existence. Humans naturally know what to do with their waste as evidenced by the instituted waste management systems in the pre-modern and modern forms. However, along with global industrialization and population explosion, waste production blew out of proportion, endangering the environment and threatening humans and other living things. With the environmental issues raised here and there, there seems to be a need to remind humans of the importance of waste management. Education and awareness campaigns play a great part here. Not all people after all are aware that the one piece of waste material they are sending to landfills or incinerators constitutes a greater threat to the environment. Presently, calls to recycle and waste reduction are widely active. And various projects and campaigns are launched every day, adding more noise to the earlier advocacies on proper waste management. The most effective way to reduce waste is to prevent it from ever becoming waste in the first place. Therefore, there is a great need in understanding the importance of waste management because unless it is acknowledged by all people, waste management efforts will not progress to further heights. Presentation and Analysis of Data Barangay Nazareth implemented the ordinance ?Tugkaran ko, Limpyohan ko? by posting sign boards around the locality especially in the streets to always remind the residents of their responsibility of properly disposing their wastes. ...read more.

A possibility in the future that there will be no longer landfill or dumping site of garbage in the city if all communities would implement and use bioreactors. For the people in Nazareth, once the orientation for the use of bioreactors will be conducted in the barangay, they will be more aware on the garbage that they would throw out. The people would definitely segregate all its garbage before handing it to the collectors: biodegradable for the bioreactor and the non-biodegradable for the buyers who buy garbage that can be reused. Barangay Nazareth?s waste management programs are all ideal; it only needs further implementation and also cooperation among the residents. With the advent of a new technology which is the Bioreactor, it can greatly contribute to the advancement of the community. Discipline is one of the major keys in achieving the goals of these waste management projects. After all, the most effective way to reduce waste is to prevent it from ever becoming waste in the first place. Interview Consent Form September 27, 2010 Good day! We are second year Business Administration students from Xavier University- Ateneo de Cagayan and we would like to conduct an interview for our Community Research Project in Political Science 10.1 regarding Barangay Nazareth?s current waste management programs. During this study, you will be asked to answer some questions as to how waste management projects are being implemented in your community. This interview was designed to be approximately a half hour in length. However, please feel free to expand on the topic or talk about related ideas. Also, if there are any questions you would rather not answer or that you do not feel comfortable answering, please say so and we will stop the interview or move on to the next question, whichever you prefer. All the information will be kept confidential. We will keep the data in a secure place. Thank You for your cooperation. God Bless! By your signature below, you agree to participate in the study. ___________________________________ (Barangay Secretary) Participant?s Signature above Printed Name ___________________________________ (Barangay Administrator) Participant?s Signature above Printed Name ...read more.