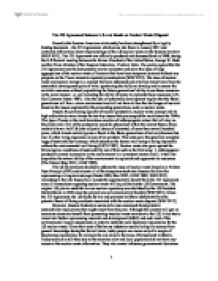 The 123 Agreement Between U.S. and Russia on Nuclear Waste Disposal. Recently the Russian-American relationship has been strengthened by a legally binding document the 123 Agreement, which came into force in January 2011 and contained information abou

The 123 Agreement Between U.S. and Russia on Nuclear Waste Wisposal Recently the Russian-American relationship has been strengthened by a legally binding document - the 123 Agreement, which came into force in January 2011 and contained information about "reprocessing" of the US nuclear waste on the Russian territory (WRP 2011). The 123 Agreement was officially produced and discussed back in 2008, during the G-8 Summit meeting between the former President of the United States, George W. Bush and the Prime-Minister of the Russian Federation, Vladimir Putin. The parties agreed that the 123 Agreement was the best possible way to encounter and solve the issue of large aggregations of the nuclear waste of America that have been temporarily stored without any progress on the Yucca mountain repository construction (WRP 2011). The issue of nuclear waste and nuclear energy as a concept has been addressed and criticized many times from the sustainable development point of view, questioning the ability to develop and consume the available resources without jeopardizing the future generations' ability to use those resources in the same manner, i.e. not exceeding the ability of nature to replenish those resources (UN, Our Common Future 1987). Also the idea of sustainable development implies that the future generations will face a clean environment and will not have to face the challenges of survival based on the issues neglected by the preceeding generations, such as nuclear waste. ...read more.

However, Russian Federation seems to be less concerned about potential sustainability implications that might result from this pact. Although this country will get an enormous economic benefit from presenting "nuclear waste services" to the US, it also has to invest into further reprocessing research and development (R&D) and redo most of the environmental impact assessments in order to establish more functional repositories for the US nuclear waste. Given that most of the heavy industries used to be kept in secrecy from general knowledge during the Soviet Union, today people are aware only of a couple of functioning repositories, for example the one close to the town of Krasnoyark in Siberia. Today secrecy is still there due to the terorrism alert and local populations do not have any access to the nuclear waste information. They also cannot influence governmental decisions that are made today, which goes against the Rio Declaration principle #10 and Agenda 21 that regard nuclear waste management and consequent responsibilities towards the human population and environment affected (Banks 2003; Stec 2010; UNDESA 2009; UNEP 1992). Thus, there is an issue of public awareness, transparency and inability to express general disagreement with the governmental decision making processes. However, the international 123 Agreement between Russia and US complies with the PPP (Rio Declaration, Principle 16) ...read more.

Yet, it is important to remember about the transparency issue that goes alond with this country and possible corruption associated with such a large international transaction. The government will also greatly benefit from receiving an opportunity to advertize its new option as a "reprosessing-nuclear waste storing land" to the world and eventually attract more "customer countries" to store their waste in growing nuclear repositories. Russia will have to look into all of the sustainability issues associated with this international deal such as public participation and associated level of transparency, storing methods and expansion of nuclear facilities, international standards and impact assessments on already existing and future repositories, as well as corruption factor that is the largest obstacle on a way to a sustainable future of the country (WRP 2011). Finally, as for the resolution of this sustainability issue, it is relatively pointless to speak about termination of the whole Agreement. The best case scenario will involve the top-bottom regulation, where the Russian government will enforce strict measures of control on the performance of nuclear waste repositories and reprosessing reactors. Additionally, the US government could potentially invest into controlling measures by establishing its own assessment of Russian performance in accordance with the 123 Agreement conditions. ...read more.