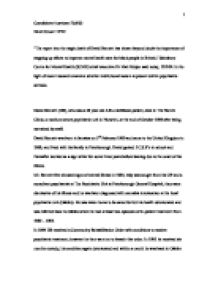 The report into the tragic death of David Bennett has shown beyond doubt the importance of stepping up efforts to improve mental health care for black people in Britain,&quot; Sainsbury Centre for Mental Health (SCMH) chief executive Dr Matt Muijen said

"The report into the tragic death of David Bennett has shown beyond doubt the importance of stepping up efforts to improve mental health care for black people in Britain," Sainsbury Centre for Mental Health (SCMH) chief executive Dr Matt Muijen said today, 12/2/04. In the light of recent research examine whether institutional r****m is present within psychiatric services. David Bennett (DB), who was a 38 year-old Afro-Caribbean patient, died in The Norvic Clinic, a medium secure psychiatric unit in Norwich, at the end of October 1998 after being restrained by staff. David Bennett was born in Jamaica on 5th February 1960 and came to the United Kingdom in 1968; and lived with his family in Peterborough. David gained 5 C.S.E's in school and thereafter worked as a sign writer for some three years before leaving due to the onset of his illness. Mr. Bennett first showed signs of mental illness in 1980, help was sought from his GP and a consultant psychiatrist at The Psychiatric Unit at Peterborough General Hospital, they were dismissive of his illness and he was later diagnosed with cannabis intoxication at the local psychiatric unit (Gables). He was taken home to be cared for but his health deteriorated and was referred back to Gables where he had at least two episodes of in-patient treatment from 1980 - 1984. In 1984 DB received a Community Rehabilitation Order with conditions to receive psychiatric treatment; however he then went on to breach this order. In 1985 he received six months custody, his condition again deteriorated and within a month he was back in Gables this time diagnosed with Schizophrenia. Although this diagnoses was made, the inquiry states that neither DB nor his supportive family were ever fully informed about his illness. ...read more.

This illness stems from the idea that Black people should not smoke cannabis as it brings along this illness of cannabis psychosis which is mainly attached to black people Fernando (2002). With regards to treatment for schizophrenia it can take the form of psychological and physical treatment. The decisive factors for selection include understanding of problems in psychological terms and motivation for insight etc Fernando (2002) and treatment is only suitable for selected people. The physical part of the treatment consists of electro convulsive therapy (ECT) and psychotropic medication and can be given without a patient's consent. African Caribbean people are most likely to receive this type of treatment as opposed to psychotherapy and counselling Community Volunteer Service (1998). African Caribbean people are also more likely to be treated with larger than average doses of medication Bhui (1999), as was the case in David Bennett. Fernando's (2002) answer to this is because psychiatrists accept the stereotypical view of black people. Another possible answer is that ethnic minorities are fearful of engaging with mental health services as they are afraid of what will happen to them. This in turn makes their situation worse and then they require the medication they were originally fearful of SCMH (2002). This overrepresentation of African Caribbean's arises from misunderstanding and discrimination when it comes to the use of compulsory power, which has resulted in the deaths of a number of African Caribbean service users while under the care of the mental health system, tragically highlighted by the death of David Bennett. This is despite Governments statistics recommendations from the David Bennett inquiry that states: The question of detention in and treatment of patients in secure accommodation should be reconsidered in order to ensure that no patient is detained in such accommodation unless it is necessary, and that the period of each detention and the treatment be kept constantly under review http://www.blink.org.uk/docs/David_Bennett_report.pdf. ...read more.

This is very important and indicates that although it may not be enough some effort is being put in to address mental health problems that practitioners and institutions may have. In my opinion it does appear that black ethnic minority groups do suffer from institutionalised r****m within the mental health system. Within my practice I feel that I can help to address this by the way that I deal with mentally disordered offenders from ethnic minority groups. This will include understanding their different needs and cultures and not stereotyping different groups. It is also important to be aware of these factors when writing reports to the Court, as "Probation Officers occupy a pivotal position in the Criminal Justice System, have a major role in the assessment, diversion, management and perhaps the most controversially, treatment of such offenders, are consequently are in a position either to reinforce or redress the discrimination which exists in that system" Bhui (1999). However regardless of this I will always try to maintain a balance as it is important to realise that they can pose a risk of harm to themselves and others. Fernando (1991) believes that if we are to gain a better understanding of mental illness, this will mean a general move towards greater understanding between people. Where, for an understanding of this unity, a realistic approach must be taken to the problems arising from differences in culture and the divisions arising from r****m. The irony that mental health is different because of culture and race and yet the same irrespective of culture and race, is a reality that we have to face up to. This discourse has studied the issues of ethnicity, culture and race. It has examined the case of David Bennett to look at whether there is institutionalised r****m within mental health services and possible solutions to address these problems. ...read more.