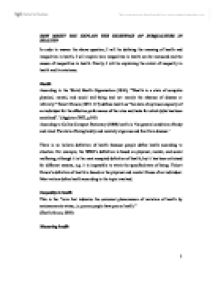 HOW MIGHT YOU EXPLAIN THE EXISTENCE OF INEQUALITIES IN HEALTH?

HOW MIGHT YOU EXPLAIN THE EXISTENCE OF INEQUALITIES IN HEALTH? In order to answer the above question, I will be defining the meaning of health and inequalities in health, I will explain how inequalities in health can be measured and the causes of inequalities in health. Finally, I will be explaining the extent of inequality in health and its existence. Health According to the World Health Organisation (1946), '"Health is a state of complete physical, mental, and social well-being and not merely the absence of disease or infirmity." Talcott Parson (1972: 117) defines health as "the state of optimum capacity of an individual for the effective performance of the roles and tasks for which (s)he has been socialised".' (Aggleton 2002, p.8-9) According to Collins Compact Dictionary (1998) health is 'the general condition of body and mind. The state of being bodily and mentally vigorous and free from disease.' There is no holistic definition of health because people define health according to situation. For example, the WHO's definition is based on physical, mental, and social wellbeing; although it is the most accepted definition of health, but it has been criticised for different reasons, e.g. it is impossible to attain the specified state of being. Talcott Parson's definition of health is based on the physical and mental fitness of an individual. Most writers define health according to the topic involved. Inequality in health This is the "term that indicates the universal phenomenon of variation of health by socioeconomic status, i.e. poorer people have poorer health." (Health forum, 2003) Measuring health The majority of people measure health inequalities in term of the extent of which diseases and illness are detected. The study of diseases is called epidemiology. Health could be measured in the following ways. Mortality This measure indicates what proportion of the population die from a disease each year. Death rates are expressed as the number of deaths per 100,000 populations. ...read more.

For example, all causes of mortality is higher in men from manual classes than those from non-manual classes for all migrant groups, except people from Africa, where the difference was present but smaller. (Acheson report, 1998) Similar gradient is found from self reported health in a survey of minority ethnic group, lower socioeconomic status is associated with higher rate of both mortality and morbidity within minority group in Britain, but it is not clear to what extent socioeconomic status explain the difference in health between ethnic groups. Occupation might not be a good way of explaining the relationship between ethnicity and inequality in health because of the high proportion of young people and women amongst them who have never worked. Minority ethnic groups tend to be less advantaged than the majority within any social class. For example, mean income for Pakistanis and Bangladeshis is about half of the whites in the same social class category. Difference in health service and access may contribute to inequalities in health because, there might be communication barriers between health professionals and the patient, e.g. health professional might not be able to communicate properly with a patient that doesn't speak English. Besides, the health professional might be r****t, so he/she will not meet the patient's required need. Social Class Class inequalities in health have been accounted for in a number of ways. 'The most important way to explain health inequalities in UK is the Black Report (1980); the report of working party on Inequalities in Health (updated in 1992)' (Macionis & Plummer, 2000, p.550) The Black report explain social class inequalities in health in four ways, they are as follows: Artefact explanation: this explanation suggest that health and class are artificial variables, and explaining casual relationship between health and class is impossible because statistics can be made to fit a researchers case, so they might be unreliable. The black report and other studies have demonstrated clear statistic links between mortality, ill health and social class, but these links have been disputed by some sociologist. ...read more.

The extent of health inequality can be answered for the period since 1950 shortly after the introduction of the National Health Service. NHS was established in 1948 by the post war labour government to provide an inclusive system of health care with free assess to everyone irrespective of the ability to pay. It aims to provide equality of health in the population by making health care free. NHS could not achieve its aim in the first 30 years of it establishment. Inequality in health continued and deteriorate in the post-war period. It was observed by Tudor Hart 1971 that NHS conforms to 'an Inverse Care Law', which means health care resources tends to be distributed in inverse proportion to need or put more simply, that those whose need is less get more resources than those with less need.' (Hart, 1993, p.59) This means that the poor working class communities tend to have the shabbiest and most overcrowded facilities in health care. It observed that General practitioners prefer to work in a prosperous communities and those who serve the poor have large number of patients and less time consultation, i.e. the rich get better health care than the poor. Social class division in morbidity and high mortality rates are the consequence of material factors, and the different experiences in health could be linked with ethnicity and gender, because of r****m and s****t beliefs have influence on the way care is provided and delivered. Materialist explanation explains the causes of inequalities in large social structure and believes that reducing inequalities in health can be done by focus on the root of the cause of social inequalities. Margaret Thatcher's government (1979 -1990) focus on cultural and behavioural explanations for health inequalities, by emphasizing the importance of individual's lifestyle on health, while the Labour government is focused on the cultural and material factors on people's health. The labour government is trying to control inequalities in health by commissioning an independent inquiry to study inequalities of health in Britain, this was chaired by Donald Acheson. They discovered that inequalities has generally worsened in the last few decades. ...read more.