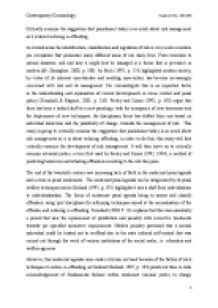 Critically examine the suggestion that punishment today is as much about risk management as it is about reducing re-offending.

targeting offenders, managing offenders as aggregate groups, situational crime risk management, and increased surveillance of at risk groups such as sex offenders (Kemshall, 2003, p. 20). For Feeley and Simon (1994, p. 175) actuarial justice practices have unobtrusively permeated a number of criminal justice practices because they are a more effective means of control than practices and techniques that aim to change the offender on order to reduce re-offending, furthermore they claim that actuarial justice techniques and practices are less likely to generate resistance. O'Malley (2004, p. 328) disputes this claim however suggesting that actuarial justice practices have grown not because they are more effective but because of their appropriateness to a particular ends, and this in large measure will be related to political struggles which establish programs on the social agenda. In this respect Garland (1995, p. 194) argues that wider issues relating to social stratification and in particular the status and value of rehabilitation are being minimsed in a system that emphasises effective controls that minimises cost and maximises security. Garland (1995, p. 194) argues that the rise of actuarial justice can be attributed to governmental aims of reducing the cost of crime. The promise to deliver 'law and order' and security for all citizens in now increasingly replaced by a promise to process complaints or apply punishments in a just, efficient, and cost effective way. Actuarial justice according to Garland (1995, p. 195) is an example of economically rationalist philosophies being introduced in the practice of crime control. ...read more.

200). The suggestion that punishment today is as much about risk management as it is about reducing reoffending appears to be unquestionable. As Feeley and Simon (1994 p174) argue risk management is inextricably linked to actuarial justice and that actuarial justice has permeated criminal justice and penal policy resulting in a shift from an old penology to a new penology. Transformative and rehabilitative rationales have been challenged by an actuarialist discourse of calculating risk and the statistical probability of re-offending. Turning the offender from a cause to be dealt with into a characterless statistic to be managed, the goal not to eliminate crime but to make it tolerable through systemic coordination (Hannah Moffat, 2005, p. 46). Whilst Feeley and Simon (1994, p. 176) argue that risk management and actuarial techniques are a more efficient and cost effective method of crime control O'Malley (2004, p. 328) maintains that risk management and practices of actuarial justice are popular because they are chosen specifically by political parties to achieve specific political goals. Kemshall and Maguire (2001, p. 239) highlights that since the 1970s concern about the risks offenders pose to the public has been growing, Durkheim (1964 cited by Cheliotis, 2006, p. 314) may suggest that risk management serves to reassure a society, who have a shared concern about the risks offenders pose, that their fears are being addressed. However as Douglas (1994, p. 296) points out this is just giving legitimacy to societal fears, which after all may not be entirely accurate. ...read more.