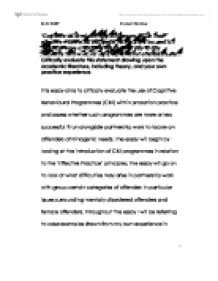 'Cognitive Behavioural programmes would be most effective if delivered alongside partnerships focused on practical ways of tackling the multiple day to day problems from which a high proportion of offenders suffer'. Critically evaluate this statement drawing upon the academic literature, including theory, and your own practice experience. This essay aims to critically evaluate the use of Cognitive Behavioural Programmes (CBT) within probation practice and assess whether such programmes are more or less successful if run alongside partnership work to tackle an offenders criminogenic needs. The essay will begin by looking at the introduction of CBT programmes in relation to the 'Effective Practice' principles. The essay will go on to look at what difficulties may arise in partnership work with group certain categories of offender; in particular issues surrounding mentally disordered offenders and female offenders. Throughout the essay I will be referring to case examples drawn from my own experience in working with CBT programmes and in multiagency working. In 1995 a Probation Circular (77/1995) required the Probation service to review their current and planned programmes against the 'What Works' initiative and effective practice principles. There was a push for results-led practice in community interventions that could stand the test of accountability (Chui, 2003, p59). Research looked at the Cognitive Behavioural based approach to programmes which was already being offered within the Prison service (Friendship et al 2001). ...read more.

The obvious difference between organisations is that the probation service's CBT programmes are aimed at reducing offending rather than at reducing symptoms of a mental disorder. Programmes that run for treatment of mental health problems are usually run for much longer than three months and emphasise 'freedom of choice' to participate rather than an enforced approach. The motivation for compliance to a CBT programme could therefore differ in both settings; if offered in Prison or whilst on Probation motivation for completion could be, for example, to move through the prison system into an open prison or to prevent incarceration altogether. Many health care professionals argue that when these programmes are offered outside of probation there is a much greater emphasis on free choice, and thus a greater probability of success (Brooks et al, 2007, p32). Gibbs (2001) supports this with her research into partnership arrangements. She concluded that where service users had chosen to undertake voluntary partnership attendance they seemed more satisfied with their work and responsibilities, but where users had to attend under compulsion they were less satisfied (Gibbs, 2001, p21). One important development in partnership working between health and probation with regard to offenders suffering from mental health issues is in the newly commissioned Dangerous and Severe Personality Disorder Programme (DSPD). ...read more.

As a TPO I undergo two years of training to understand, identify and manage potential risk of harm, other partnership agents, for example a housing advice worker, may receive none whatsoever. The NPS must therefore be mindful that whilst using partnership working to solve practical difficulties they do not 'shirk' the responsibility of risk management. The positive aspects of multiagency risk management in terms of the offender are seen clearly when examining work on domestic violence. In conclusion we may argue that without practical help from partnership agencies to tackle the multiple problems faced by offenders, the work done on CBT programmes may be meaningless. An offender's social exclusion and practical problems may create potential barriers to change and thus prevent successful intervention work to be done. In order that the effect of CBT group programmes have any impact on the lives of offenders it seems ever more important for agencies to work together at solving all the issues concerned rather than to chip away at surface problems. Brooks on consideration of this states that 'CBT methods do not claim to be the Universal answer to effective intervention in criminal behaviour; they are only part of the answer' (Brooks et al, 2007, p43) thus if the NPS wants to succeed in rehabilitation they must offer a multi-agency holistic approach to offender management and problem solving. ...read more.