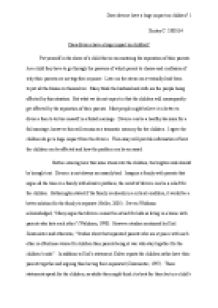 Does divorce have a huge impact on children?

﻿Does divorce have a huge impact on children? Shirley C. 5380134 Does divorce have a huge impact on children? Put yourself in the shoes of a child that is encountering the separation of their parents. As a child they have to go through the pressure of which parent to choose and confusion of why their parents are not together anymore. Later on the stress can eventually lead them to put all the blame on themselves. Many think the husband and wife are the people being affected by this situation. But what we do not expect is that the children will consequently get affected by the separation of their parents. Most people might believe it is better to divorce than to torture oneself in a failed marriage. Divorce can be a healthy decision for a fail marriage; however this will remain as a traumatic memory for the children. I agree the children do get a huge impact from the divorce. This essay will provide information of how the children can be affected and how the problem can be accessed. Before entering how this issue stress outs the children, the brighter side should be brought out. Divorce is not always necessarily bad. Imagine a family with parents that argue all the time or a family with abusive problem, the result of divorce can be a relief for the children. ...read more.

If the boy grew up without their father?s guidance, they tend to have hard time making male friends. As a result, they will spend more time with female friends which lead to sexual identity problems. Even though girls have lesser impact, but there are still a few. Kalter found higher rates of running away, substance abuse, and early sexual activity among girls (Zinsmeister, 1997). In their later life, they will be afraid to commit and trust their future spouse. Ever heard of the statement, ?it takes time to heal? ? Time does heal certain pain, but it does not take away scars. Gallagher described these children as the permanently ?scarred? (Gallagher, 2003). The memories of the parents? fail marriage will be back to haunt them which creates the fear of repeating the failure (Matthew, n.d.). I am sure no parents are willing to their own children make the same mistakes they did and go through the pain again. Even as years pass by children still do wish for maintained relationship among the parents. From the data retrieved by Dr. Ahrons, after 20 years children still wish for their parents to get along. They long for a stable and good relationship with both parents. If the children grew up in the environment where their parents still fight after divorce, relationships between the child and parent can get affected too. ...read more.

But is that really a solution for the children? Think again. Divorce is not an issue for two people in a family, but it is an issue for the family as a whole. Even though the cause may be from the parents, but the aftermath have effects on the rest of the family too. ________________ Reference Ahrons, C. (2006). Family Ties After Divorce: Long-Term Implications for Children. Family Procress, 46. Retrieved from http://www.familieslink.co.uk/download/sept07/Family%20Ties%20After%20Divorce%20LongTerm%20Implications.pdf Gallagher, Maggie. (2003). Divorce Harms Children. Opposing Viewpoints: The Family. Ed. Auriana Ojeda. San Diego: Greenhaven Press, 2003. Heller, K. M. (2005). The Impact of Divorce on Children. Parenting and Marital Advice. Retrieved from http://www.drheller.com/impact_divorce.html#top Matthews, D. (n.d.) Long-term Effects of Divorce on Children. North Carolina Cooperative Extension Service. Retrieved from http://www.ces.ncsu.edu/depts/fcs/pdfs/fcs482.pdf Meyer, C. (2010).What does my child need most from me now that I am going through a divorce?. Going Through Divorce; A Child?s Perspective. Retrieved from http://divorcesupport.about.com/od/thechildsperspective/f/childseyes.htm Oesterreich L. (1996). Divorce matter series, A child?s view. [Pm 1641]. Ames, IA: Iowa State University Extension. Oregon. (2007). Understanding and Dealing with Children During Divorce. Oregon Counseling. Retrieved from http://www.oregoncounseling.org/Handouts/DivorceChildren.htm Tudor, Darcia C. (2009). Mediated Divorce is Best for Children. Opposing View Points: Divorce. Ed. Mike Wilson. Detroit: Greenhaven Press, 2009. Waldman, Steven. (1998). Divorce Harms Children. Opposing Viewpoints: Child Welfare. Ed. Carol Wekesser. San Diego: Greenhaven Press, 1998. Zinsmeister, Karl. (1997). Divorce?s toll on Children. Current. Retrieved from http://find.galegroup.com/ovrc/infomark.do?&contentSet=IAC-Documents&type=retrieve&tabID=T002&prodId=OVRC&docId=A19381818&source=gale&srcprod=OVRC&userGroupName=mahidol&version=1.0 ...read more.

This essay looked at the impact of divorce on children.
It would have been helpful to make clear the age range being referred to as divorce affects youngsters differently according to how old they are. This really should be reflected in the essay title too. There are huge generalisations made (page 3 for example) for which, if the writer believes them to be true, a supporting reference should be given. The writer indicates that there are differences in the coping mechanisms of boys & girls, but does not state the possible reasons for this. Remember to reference correctly; check the Havard referencing guidelines.
The writing style needs amending as at times the work reads as if it was an information leaflet. There were several spelling & grammatical errors which could be minimised by careful proof-reading.
3/5