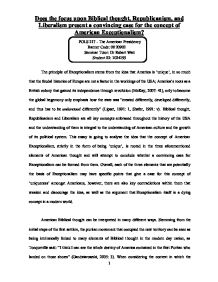 Does the focus upon Biblical thought, Republicanism, and Liberalism present a convincing case for the concept of American Exceptionalism?

Does the focus upon Biblical thought, Republicanism, and Liberalism present a convincing case for the concept of American Exceptionalism? POLS 217 - The American Presidency Banner Code: 08 20902 Seminar Tutor: Dr Robert Watt Student ID: 1024193 The principle of Exceptionalism stems from the idea that America is 'unique', in so much that the feudal histories of Europe are not a factor in the workings of the USA; America's roots as a British colony that gained its independence through revolution (McKay, 2007: 41), only to become the global hegemony only emphasis how the state was "created differently, developed differently, and thus has to be understood differently" (Lipset, 1991: 1, Shafer, 1991: v). Biblical thought, Republicanism and Liberalism are all key concepts embraced throughout the history of the USA and the understanding of them is integral to the understanding of American culture and the growth of its political system. This essay is going to analyze the idea that the concept of American Exceptionalism, strictly in the form of being 'unique', is rooted in the three aforementioned elements of American thought and will attempt to conclude whether a convincing case for Exceptionalism can be formed from them. Overall, each of the three elements that are potentially the basis of Exceptionalism may have specific points that give a case for this concept of 'uniqueness' amongst Americans, ...read more.

Republicanism within the USA symbolises that their origins created a vastly different culture and state of mind than those that came before it, namely Europe and its post-feudal society (Lipset, 1991: 15). However, this culture can be seen to contradict itself in many ways. The American adoption of Republicanism is riddled with paradoxes; the North/South divide of the USA were constantly contrasting each other in that they embraced, respectively, "equality and hierarchy, liberty and oppression, individuality and obedience" (Kloppenberg, 1998: 59). These cultural juxtapositions are exceedingly evident when analysed in terms of slavery. It becomes quite clear then, that the virtues emphasised by Republicanism are not necessarily as 'unique' in practise as they may seem in principle. An element of Republicanism that can certainly be argued to be Exceptional is the innate belief in individualism when it comes to civic virtue; the love of country and patriotism (Brown, 1987: 39). An example of this is the US Military; Its non-conscription military is larger than that of India's, even though the latter's population is almost four times greater than that of the USA, showing the rooted effect civic virtue has on the nation's people (Military Statistics, 2010). It must be clarified that the Republican foundation of the American form of government was the most successful attempt at such a political system in a post-'Peace of ...read more.

of the American people (Reynolds, 2009: xxi); lucrative government contracts, taxes and even interventionist policies have been seen to go against what the Founding Fathers originally foresaw in a state with the mindset of Republicanism and Classical Liberal thought (Reynolds, 2009: xxii). Intervention from the Government is hardly unique and thus it can be suggested that both Classical and Modern Liberalism fail to give convincing cases for American Exceptionalism (2009: xvii). So far, the case for American Exceptionalism, in terms of both Liberalism and Republicanism can be seen to be losing credibility (2009: xix). Ultimately, the history of the USA, or lack thereof in fact, when acknowledging that they do not have the feudal background of Europe, shows that the principles of Biblical thought, Republicanism and Liberalism may seem some what Exceptional when viewed with no context, but the practices of these ideals fail to give the USA credibility in any assertion that might suggest it is Exceptional, and therefore unique. What can be said to be Exceptional about America is that its experiences as a nation expanding West did change any surviving European attitudes and mould the people into who they are today, however the relation to any of the three topics discussed is very limited and therefore, this idea is not strong enough to create an overall claim to America's potential Exceptionalism. ...read more.