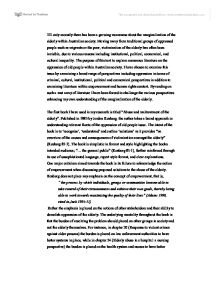 examine literature on the oppression of elderly people

Till only recently there has been a growing awareness about the marginalization of the elderly within Australian society. Moving away from traditional groups of oppressed people such as migrants or the poor, victimization of the elderly has often been invisible, due to various reasons including institutional, political, economical, and cultural inequality. The purpose of this text to explore numerous literature on the oppression of old people within Australian society. I have chosen to examine this issue by examining a broad range of perspectives including oppression in terms of criminal, cultural, institutional, political and economical perspectives in addition to examining literature within empowerment and human rights context. By reading on such a vast array of literature I have been forced to challenge the various perspectives enhancing my own understanding of the marginalization of the elderly. The first book I have used in my research is titled "Abuse and maltreatment of the elderly". Published in 1983 by Jordan Kosberg, the author takes a broad approach in understanding relevant facets of the oppression of old people issue. The intent of the book is to 'recognise', 'understand' and outline 'solutions' as it provides "an overview of the causes and consequences of victimization amongst the elderly" (Kosberg 83:1). The book is simplistic in format and style highlighting the books intended audience; "... the general public" (Kosberg 83:1), further reinforced through its use of unsophisticated language, report style format, and clear explanations. One major criticism aimed towards the book is its failure to acknowledge the notion of empowerment when discussing proposed solutions to the abuse of the elderly. ...read more.

effect older people unrealistic fears"(1990:18). This failure of the government to take any responsibility for crimes against the elderly and blaming it on the media is an attempt to reassure the public's faith in the government. Another Government report was used as my collection of literature on old people, in this case it was chosen to gain an understanding of culture and its relation with the oppression of the elderly. Titled 'Local government and the ethnic age' and published in 1987 the report was a study on the relationship between the local governments of Northcote and Brunswick, Melbourne and that of the ethnic community aiming to address the "Needs of Italian and Greek aged care residents". The report indicates that migrant communities are being disadvantaged due to various reasons including language barriers, inability to follow Australian lifestyle and values, lack of social integration, low economic resources, and racial tension. It is interesting to examine the power relations that are evident, as there a two underlying discourses present throughout the report; the dominant group discourse (White institutional Australia) and the subordinate group discourse (Ethnic elderly) (Osmond 2006). There is a well defined balance of power within this report as the onus is placed upon white institutional power (the local government) to control the problem of elderly oppression while little attention is placed on the ethnic elderly discourse and principles of empowerment. This power relationship is demonstrated through the idea of having the dominant group (Institutional Australia) having programs such as Meals on wheels (a service delivering Australian meals to the elderly) ...read more.

Conversely Jack in "Empowerment in community care' failed to place any emphasis on means other then empowerment in an attempt to resolve the issue. For instance, raising the issue through the media, as it was demonstrated through Yates article "Poverty a growing crisis for our elderly" which only made little progress to instigate any significant social change due to its small scale nature and inability to reach a large audience. All in all, the various texts did enhance my understanding on the nature of elderly oppression within society. I remain optimistic for the future of this issue as there is growing awareness and stronger involvement of groups empowering individuals, to perhaps one day live in a society in which the elderly are no longer seen as a helpless group rather one that prospers and succeeds , as eloquently put by the famous American writer Pearl S Buck; "It is a mistake to regard age as a downhill grade toward dissolution. The reverse is true. As one grows older, one climbs with surprising strides". - Pearl S buck (1892-1973) REFERENCES TEXTS IN LITERATURE REVIEW Jack, R (1995) 'Empowerment in community Care' Chapman &Hall Chapter 9 Tony Carter and Caroline Nash "Pensioner forums- a voice for older people" Kosberg J (1983) "Abuse and maltreatment of the elderly" Jon Wright Publications NSW Premiers Department (1990) 'Ageing in New South Wales- Crime and safety' Office on Ageing, NSW Premiers Department Office of Local Government (1987) 'Local Government and the ethnic Aged' Commenwealth of Australia Phillipson C (1982) 'Capitalsim and the construction of old Age' Macmillian Press Yates 1 (2006) 'Poverty a groowing crisis for our elderly' published in The Adveritiser- Adelaide October 13 2006 pg 08 cited at http://proquest.umi.com/pqdweb?index=8&did=1144351991&SrchMode.. ...read more.