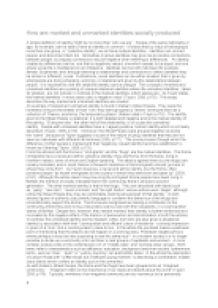 How are marked and unmarked identities socially produced

﻿How are marked and unmarked identities socially produced A simple definition of identity might be no more than ?who we are?. People of the same nationality or age, for example, can be said to have an identity in common. It follows that by virtue of belonging to more than one group, or ?collective identity?, we all have multiple identities. Identities can connect people; and disconnect them too. Similarities in group identities may give rise to positive connections between people, but equally connections may be negative when referring to differences. An identity created by differences can be: one that is negatively valued; one which ceases to be equal; and one where social life is maintained on an imbalance. Identities can be both individual (for example: female, Southerner) and, through referring to relationships and connections to others (whether they be similar or different), social. Furthermore, social identities can be either situated, that is given by what people are doing (shopping, working), or relational and given by the relationships between people. It is important to note this relational identity can be unequal. The concepts of marked and unmarked identities are a pairing of unequal relational identities where the unmarked identities - taken for granted - are not noticed; in contrast to the marked identities, which always are. As Taylor states, the marked identities ?in most cases carry a negative value? (Taylor, 2009, p179). This essay describes the way marked and unmarked identities are created. ...read more.

The difference between theories such as those of Erving Goffman and Michael Foucault is primarily one of focus. Goffman analysed social rules governing nonverbal interactions by individual people to develop his theories using the metaphor of a theatre. Goffman demonstrated that the most casual actions, such as posture, body and eye movements that people make are performances aimed toward communicating a positive impression for an audience. Goffman focused on the self and self-presentation he preferred to study individuals. Goffman?s descriptions of individual?s face-to-face interactions formed the large body of his work through this he noted that social interactions could be reworked by changing interactions. In contrast, Michael Foucault preferred to analyse the entire society. He examined the ways in which societies function and the principles of exclusion societies developed to define their differing forms of order throughout different historical times. Foucault did not conduct the type of first hand and intensive field work characteristic of the development of Goffman's theories. Foucault's theories on history and the self were more impersonal and global in focus. They centred on how societies interpreted and implemented their definitions of sane and insane, innocent and criminal and insider and outsider and how with each differing discourse social change emerged creating a new and greater power than the last. Goffman looks at the way individuals present themselves and their activities to others using the theatre as a framework. In his theory of impression management Goffman saw that through interaction with others in society an impression of the subject is given off to others. ...read more.