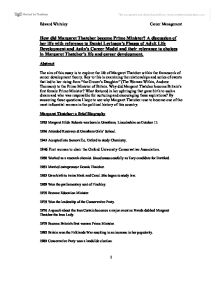 How did Margaret Thatcher become Prime Minister? A discussion of her life with reference to Daniel Levinsons Phases of Adult Life Development and Astins Career Model and their relevance to choices in Margaret Thatchers life and car

How did Margaret Thatcher become Prime Minister? A discussion of her life with reference to Daniel Levinson's Phases of Adult Life Development and Astin's Career Model and their relevance to choices in Margaret Thatcher's life and career development. Abstract The aim of this essay is to explore the life of Margaret Thatcher within the framework of career development theory. Key to this is examining the relationships and series of events that led to her rising from "the Grocer's Daughter" (The Woman Within, Andrew Thomson) to the Prime Minister of Britain. Why did Margaret Thatcher become Britain's first female Prime Minister? What featured in her upbringing that gave birth to such a dream and who was responsible for nurturing and encouraging these aspirations? By answering these questions I hope to see why Margaret Thatcher rose to become one of the most influential women in the political history of this country. Margaret Thatcher: a Brief Biography 1925 Margaret Hilda Roberts was born in Grantham, Lincolnshire on October 13. 1936 Attended Kesteven & Grantham Girls' School. 1943 Accepted into Somerville, Oxford to study Chemistry. 1946 First woman to chair the Oxford University Conservative Association. 1950 Worked as a research chemist. Stood unsuccessfully as Tory candidate for Dartford. 1951 Married entrepreneur Dennis Thatcher. 1953 Gave birth to twins Mark and Carol. She began to study law. 1959 Won the parliamentary seat of Finchley. 1970 Became Education Minister. 1975 Won the leadership of the Conservative Party. 1976 A speech about the Iron Curtain becomes a major event as Pravda dubbed Margaret Thatcher the Iron Lady. 1979 Became Britain's first woman Prime Minister. 1982 Britain won the Falklands War resulting in an increase in her popularity. 1983 Conservative Party won a landslide election. 1987 Record third general election victory. 1990 Following a challenge to her leadership, Margaret Thatcher resigned and was succeeded by John Major. 1992 Entered the House of Lords as Baroness Thatcher. ...read more.

At school Thatcher was required to study home economics; which involved learning how to cook, wash and iron shirts and manage the household budget. This is an obvious example of gender segregation in her education. The issue being that women who experience this may be more prepared for gender segregation in the work place. A quality it seems she had as when running for her first public post in Dartford she felt that she would have to work twice as hard as her male counterparts. Thatcher attended a girl's school which was also a grammar school. Both of these factors are associated with the level of education Thatcher was able to achieve as quantitative studies of both grammar and single s*x schools show students attending such schools are likely to do better than those who do not. Referring once again to Cooper, c*x and White 1992 in their study of successful women, over half of their subjects had attended grammar school and over three quarters went to single s*x schools. Having attended a single s*x school will also have impacted on her choice of subject when attending Oxford, as girls in single s*x education are much more likely to pursue male dominated subjects such as mathematics and in Thatcher's case, science (Collin Hughes 1990). Thatcher received a second class degree from Oxford and was placed among the top graduates in the country. This again, is in line with studies of successful men and women. What made her unique was the fact that her major was in Chemistry: a subject considered to be male dominated, as nearly 70% of science graduates are male. On the face of it this it may seem to go against conventional theory but the fact that she attended a single s*x school coupled with her father's personal interest in science makes it not unexpected. As mentioned earlier she and her father attended extension lectures in the evenings. ...read more.

that she herself might be a suitable candidate. In November 1974 Keith Joseph confided in Thatcher that he would not be running as a candidate, Thatcher announced her intentions to become party leader. Having gained support from those already loyal to her in the party as well as from two leading candidates, both of whom chose to drop out of the running on February 11th 1975 Thatcher was elected as Leader of the Opposition. In terms of Levinson's theory that completes Thatcher's journey from Pre-adulthood to life post Middle Adulthood. And it was perhaps this journey more than the five years that followed that were instrumental in her becoming Prime Minister. In fact it was more down to the poor performance of the Labour government in power rather than Thatcher's leadership that lead to her winning the next general election. In terms of the applicability of her life to Levinson's theory it seems that for the most case her adult development has been very much in line with his thinking. Perhaps most importantly is the manner in which she was able to negotiate the transitions between seasons. Rather than having to looking within herself and at her family and work situations the transition in nearly every case coincided with a major change life, over which she often had very little control. It was this series of smooth transitions that allowed Thatcher a relatively crisis free life. In particular how she was able to manage the transition periods of life; manipulating them in such a way that her life was better having experienced the transition. Astin's model is largely appropriate as an explanation of the development of Thatcher's early years. Levinson's theory helps explain Thatcher's adult development more precisely than Astin's. That Thatcher is a female does detract from the applicability of either Astin's model or Levinson's theory. Her fathers influence in her early development and the presence of a strong social and support network coupled with the emergence of mentors in her adult life are all contributing factors in the realisation of her Dream: to become Prime Minister. ...read more.