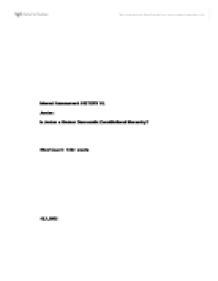 Internal Assessment: HISTORY HL Jordan: Is Jordan a Modern Democratic Constitutional Monarchy? Word Count: 1994 words 15,1,2003 19/01/03 Is Jordan a Modern Democratic Constitutional Monarchy? Plan of investigation In an address on Election Law Amendments on August 17, 1993 King Hussein I of Jordan stated in Amman ".. Democracy in Jordan has become an example and model, a blessed tree deep-rooted in this beloved Arab land, ..". On October 29, 1995 at the Middle East and North Africa Economics Summit in Amman, King Hussein I stated "We are also aware that the peace and prosperity can not prevail except in an atmosphere of justice, freedom, democracy, respect for human rights and the supremacy of the law." With such statements, often heard by the kings and ministers of Jordan since the end of the eighties, the leaders of the Hashemite Kingdom of Jordan imply that democracy is not only a necessity but also practiced in Jordan. This investigation shall ponder on the exercise of democracy in Jordan comparing it to the basic principals of modern democracy in the western world and answer whether Jordan is a modern Democratic Constitutional Monarchy. Primary facts about the governmental system of Jordan are collected and presented from seven different sources in the Summary of Evidence. ...read more.

claim the editors of Mid-East Realities. Evaluation of sources The chapter Jordan in the Encyclopedia Britannica provided clear background information on the recent history and government system of Jordan. Being an organization valuing its objectivity, focusing on presenting facts and trying to evade personal judgment and interpretation, the information provided is accepted to be reliable and trustworthy worldwide. Reading the presented material, its obvious the Britannica attempts and succeeds to take a neutral role striving to stay objective in its documentation and observations. The article refrains from passing judgment on the level or quality of the democracy in place, but rather presents the structure of the government and its constitution. The reader, assumed to be scholars and people from the academics world wide, must then evaluate and interpret the presented facts himself. Hence this source is to be considered as reliable and unbiased. The myth of Jordanian "democracy" and the case of Rami Khouri is a second relevant source used for collecting evidence on the investigation question. This source is an editorial article from Mid East Realities (MER). Since the author is not specified, the MER organization, which published the article, must be regarded. MER is a pro Palestinian organization dedicated to present the views, philosophy and politics of the Palestinians and Jordanian Palestinians to the western and USA public. ...read more.

Voting does take place yet it's only to the Lower House in the parliament. Unlike many other Arab countries, the right to vote is also given to women, which itself represents a further step towards modern human rights. However, it is clear that the practiced democracy, to this day, is minimal and not modern in comparison to the West and USA. Perhaps, with further continuation of the steps towards democracy, Jordan will become an example of a functioning democratic monarchy within the Middle East. List of sources AMMAN, Jordan's democracy stagnant, says poll, Middle East TIMES. Week 38, 2002 http://www.metimes.com/2K2/issue2002-38/reg/jordans_democracy_stagnant.htm (Feb, 2002) "Democracy," Microsoft(r) Encarta(r) Online Encyclopedia 2002 http://encarta.msn.com (c) 1997-2002 Microsoft Corporation. All Rights Reserved Democracy and Human Rights, King Hussein I, http://www.kinghussein.gov.jo/views_democracy7.html Hanson, Victor D. Democracy in the Middle East, News Corporation Weekly Standard 10/21/2002 http://www.weeklystandard.com/Content/Public/Articles/000/000/001/769bfuqn.asp "Jordan." The Britannica Encyclopedia. 1986, Vol 6 (referred to as Source 1) "Jordan's democracy is still half way" The Star, Jordan's political, economical and cultural weekly, 22 - Sep - 2002 Shlaim, Avi. The Iron Wall. Israel and the Arab World. New York: W.W. Norton & Company, Jan 2001. Tamimi, Azzam. Ed. Islam and Democracy, Jordan and the Muslim Brotherhood Presented at Kyoto University, Japan 17 July 1999 "The myth of Jordanian "democracy" and the case of Rami Khouri" Mid-East Realities http://www.middleeast.org (referred to as Source 2) ...read more.