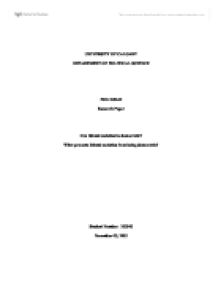 UNIVERSITY OF CALGARY DEPARTMENT OF POLITICAL SCIENCE POLI 359.02 Research Paper Can Islamic societies be democratic? What prevents Islamic societies from being democratic? Student Number: 203943 November 03, 2003 Introduction This paper will examine the religious, cultural, state and leadership factors and external factors that impede the development of democracy in Islamic societies. The development depends on many different factors in Muslim countries. Scholars on the study of democratization had often argued that many different factors contribute to the development of democratic regimes. Domestic and international forces can all help shape the political development in a country. There is not a single attribute which is entirely responsible for the slow democratic progress in Islamic societies. The religion is not necessary the factor that inhibits democratization. Other domestic factors, such as the history and the culture of the societies, and external factors, such as the exploitation of other states or the pressure for increased democracy in the region, can all promote or impede democratization Domestic factors, such as popular mobilization is a very important factor that contributes to the success of democracy in the Muslim world. However, popular mobilization is not the only attribute that foster development of democracy. . Many governments in the Muslim societies have taken great steps in reforming the government. Political leaders need to implement true and genuine regimes. Obstacles Islam and Democracy Many scholars had examined the relationship between Islam and democracy. Some claimed that the religion is incompatible with democracy and is the main factor that inhibited the development of democracies in most Muslim countries. ...read more.

Other States Democratization not only troubles autocratic rulers in the Muslim world but also many Western governments. The former fear any opposition. For leaders in the West, democracy raises the prospect of old and reliable friends or client states being transformed into more independent and less predictable nations that might make Western access to oil less secure. Thus stability in the Middle East has often been defined in terms of preservation of the status quo. United States have always held a double standard in its promotion of democracy. United States supports free elections only as long as the right political party or desirable leader wins. United States' support of authoritarian regimes continued to focus mainly on the Muslim Middle Eastern states such as Jordan and Egypt. The American intervention in these countries indicates not only a lack of support for democracy, but also an active American involvement in the obstruction of its evolution. Moreover, the American isolation via containment of what it called rogue states strengthens radicals and impedes democratization in these states as well. The American reluctance to promote democracy in the Middle East is based on their cultural cognition that assumes that democratization will bring to power Islamic fundamentalist groups that will undermine the American interests and might even unite the Arab Islamic world under one united Islamic empire that would emerge as the main challenger in the world against the American hegemony and the West. Dependency theorists claimed that "global capitalism was the cause of underdevelopment in the Third World and implicitly, of the lack of democracy in the Third World. ...read more.

Iran is a theocratic republic with a growing democratic reform movement. Iraq is currently a case study in nation-building in the aftermath of the dictatorial regime of Saddam Hussein. It is difficult to foresee how Islamic societies can realize its tremendous potential without genuine political reform. Evidently, it is not Islam that is the greatest obstacles to serious democratization. On the contrary, the most important impediment is the continuing resistance of established political regimes, whose leaders espouse the language of democracy but rarely permit political liberalization beyond that which they can orchestrate and control. Mona Yacoubian makes a persuasive case for greater U.S. involvement in urging the Algerian government toward greater reform. The key to the success of democratization in Islamic societies is imposition of more freedom, expanding freedom of the press, freedom of religion, freedom of thought, and freedom to from independent organization. The process may be long and slow but it must be real, sustainable, and measures should be taken to prevent the reversal of it. History shows that many governments in the Muslim world have become adept at promising democratic reforms only to deliver more oppression. The international community needs to exert sustained pressure on the existing government to allow more freedom. Real and genuine reforms are needed; liberal and moderate voices cannot be heard in an environment of fear and repression. United States and European countries should stop supporting dictator in the name of stability to promote peace and strengthen thee voices of liberal Islam. Muslim countries must also gain experience with democratic institutions and practices. Nonetheless, the success to the development of democracy depends on the citizens to resolve their inner crisis ultimately. 2 ...read more.