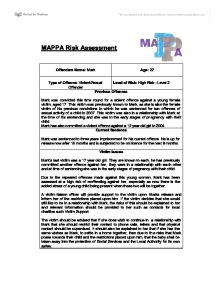 MAPPA Risk Assessment Offenders Name: Mark Age: 22 Type of Offence: Violent/Sexual Offender Level of Risk: High Risk:- Level 2 Previous Offences Mark was convicted this time round for a violent offence against a young female victim, aged 17. This victim was previously known to Mark, as she is also the female victim of his previous convictions in which he was sentenced for two offences of sexual activity of a child in 2007. This victim was also in a relationship with Mark at the time of his sentencing and she was in the early stages of pregnancy with their child. Mark has also committed a violent offence against a 12 year old girl in 2004. Current Sentence Mark was sentenced to three years imprisonment for his current offence. He is up for release now after 18 months and is subjected to be on licence for the next 9 months. Victim Issues Mark's last victim was a 17 year old girl. ...read more.

It should also be explained to her that if she has the same wishes as Mark, to settle in a home together, then due to the risks that Mark poses towards their child and the restrictions placed upon him, that the baby shall be taken away into the protection of Social Services and the Local Authority for its own safety. Child Protection Issues As Mark and his victim now have a child together, there is the added issue of the amount of risk that Mark will cause harm to this child. Due to him being assessed at being a high risk to children, under The Children Act 1989 Section 17, certain provisions and restrictions shall be put into place regarding contact and access with the child. Contact with the child will be restricted to supervised contact, once a week, to take place within a Family Centre Comments from Offender Mark has said that upon his release, he hopes to set up a home with his partner and raise their child together. ...read more.