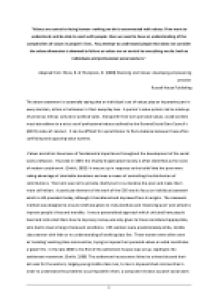 Social Work Values. Values and ethics have been of fundamental importance throughout the development of the social work profession.

﻿?Values are central to being human: nothing we do is unconnected with values. If we want to understand, and be able to work with people, then we need to have an understanding of the complexities of values in people?s lives. Any attempt to understand people that does not consider the values dimension is doomed to failure as values are so central to everything we do, both as individuals and professional social workers.? Adapted from: Moss, B. & Thompson, N. (2008) Meaning and Values: developing empowering practice. Russell House Publishing The above statement is essentially saying that an individual?s set of values play an imperative part in every decision, action or behaviour in their everyday lives. A person?s value system can be made up of personal, ethical, cultural or political vales. Along with their own personal values, social workers must also adhere to a strict set of professional values outlined by the General Social Care Council?s (GSCC) codes of conduct. It can be difficult for a practitioner to find a balance between these often conflicting and opposing value systems. Values and ethics have been of fundamental importance throughout the development of the social work profession. Founded in 1869, the Charity Organisation Society is often identified as the roots of modern social work. (Smith, 2002) It was set up in response to the belief that the poor were taking advantage of charitable donations and was a means of controlling the distribution of contributions. ...read more.

(Dalrymple & Burke, 2006) When working in an anti-oppressive manner, it is vital to understand and value difference; to appreciate that different groups or individuals experience and cope with disadvantage in diverse ways and may view a situation in a different way to a practitioner. This requires the social worker to have an implicit knowledge of the group or individual?s culture and values; but also to fully understand their own values and experiences of power. Social workers have a powerful position within society, however there will have been periods in their lives when they have felt powerless, and it is important to reflect on these times and to try and empower the service user. (Parrott, 2010) ?Effective empowerment practice involves understanding the process of change that enables us to feel less powerless.? (Dalrymple & Burke, 2006, p. 113) The first stage of empowerment is concerned with the links between an individual?s personal position and structural inequalities; their access to power and resources. It is the job of the social worker to enable service users to replace feelings of powerlessness with some sense of power over their situation; working in a partnership that is committed to change. ?The anti-oppressive principle of reflexivity demands that workers continually consider the ways in which their own social identity and values affect the information they gather.? (Burke & Harrison, 2002, p. ...read more.

in which she worked ? If a recipient had been offended and detected the origins of the document it would have reflected badly on both Ms K and the social work field as a whole. The simple act of forwarding of an e-mail, something a lot of people do without thinking, can as a social worker call the individual?s character into question. Similarly there was a case involving a teacher under investigation by the school in which she worked after posting a picture of herself on the social networking site facebook, which showed her on holiday wearing a bikini. (Radnedge, 2010 ) With the increased reliance on e-mail and social networking sites as a means of communication, practitioners need to be cautious of the content of their pages and fastidious about who can access their information. Reflecting back on the statement at the beginning of this essay, each line is essentially saying the same thing; that every decision, action or behaviour made by an individual is influenced by their value base. Social workers are constantly trying to balance their professional and personal values to ensure good practice. Working within an anti-oppressive framework and ensuring social workers are equipped with the skills, knowledge and understanding of social inequalities and power struggles; whilst being mindful of the GSCC codes of practice and understanding personal values is the only way to effectively deliver services to the people that need them. ...read more.

This essay shows excellent understanding of social work values: where they originated from and how it can be hard to implement in practice. The distinction is made between ADP & AOP, although