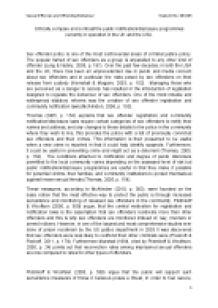 s****l Offences and Offending Behaviour. Critically compare and contrast the public notification/disclosure programmes currently in operation in the UK and the USA.

﻿s****l Offences and Offending Behaviour Student No. 481365 Critically compare and contrast the public notification/disclosure programmes currently in operation in the UK and the USA. s*x offender policy is one of the most controversial areas of criminal justice policy. The popular hatred of s*x offenders as a group is unparalled to any other kind of offender (Jung & Nutely, 2008, p. 191). Over the past few decades, in both the USA and the UK, there has been an unprecedented rise in public and media concern about s*x offenders and in particular the risks posed by s*x offenders on their release from custody (Kemshall & Maguire, 2003, p. 102). Managing those who are perceived as a danger to society has resulted in the introduction of legislation designed to regulate the behaviour of s*x offenders. One of the most notable and widespread statutory reforms was the creation of s*x offender registration and community notification laws (McAlinden, 2006, p. 193). Thomas (2005, p. 154) explains that s*x offender registration and community notification/disclosure laws require certain categories of s*x offenders to notify their names and address, and any changes to these details to the police in the community where they wish to live, this provides the police with a list of previously convicted s*x offenders and their crimes. This information is then presumed to be useful when a new crime is reported in that it could help identify suspects. Furthermore, it could be useful in preventing crime and might act as a deterrent (Thomas, 2005, p. ...read more.

64). The Department of Justice brings together all of these local registries into one place on the Dru Sjodin National s*x Offender Public website (Dru Sjodin National s*x Offender Public Website , N.D). It is offered free of charge to the public and provides advanced search tools that allow the public to obtain s*x offender information and a list of local registries by state. However, the information obtained from this site may still be limited because it relies on only the information provided on local registries (Dru Sjodin National s*x Offender Public Website , N.D). The only information that is uniformly given on every website is a warning against the misuse of the information. One of the problems associated with websites providing limited information comes into focus when the police release information about the crime an offender has been convicted of without providing crucial information about the actual threat that the offender poses to the community (Greek, 2010, p. 299). For example, when a 21-year-old man has consensual s*x with a girl who is just under the legal minimum age requirement the law would label him a r****t. The police may then notify the community that he is a r****t but the lack of specifity means that the community is not alerted to the actual level of risk he poses, i.e. a statutory r****t as in this case may well pose significantly less risk than a predatory r****t. This in turn could lead to unfounded unrest within the community or even vigilantism (Meloy, Saleh, & Wolff, 2007, p. ...read more.

438). Critics also challenge the effectiveness of notification laws, one study conducted by Prescott & Rockoff (2011, p. 198) examined data from 15 states in the USA over more than 10 years. They was discovered that requiring s*x offenders to register with police without public notification reduces reported s*x crime substantially, more than likely due to the better police monitoring and effective arrest of recidivists. However, when public notification was added to registration laws most states saw slightly higher levels of reported s*x crimes. Prescott and Rockoff (2011, p. 199) claim that whilst the threat of being subjected to public notification may deter some first time offenders it appears to have the opposite effect on released offenders. Prescott and Rockoff (2011, p. 199) argue their findings suggest that the reason why s*x offenders are more likely to reoffend if their information is made public is that the associated psychological, social, or financial costs make a crime free life relatively less desirable. In conclusion, public notification/disclosure programmes can be traced to the USA where s*x offender registers began in California as far back as the 1940s. It was not until the 1990s however, that increased public and media awareness of s****l offending ultimately led to the public access to information of those on the register (Thomas, 2005, p. 153). Views on s*x offender public notification/disclosure programmes differ between the USA and the UK with the USA being at one end of the spectrum, revealing details of s*x offenders to the public on searchable websites. The UK however, whilst not at this stage, does appear to be moving in that direction (Plotnikoff & Woolfson, 2000, p. 508), with the launch of 'discretionary disclosure' or Sarah's Law. ...read more.