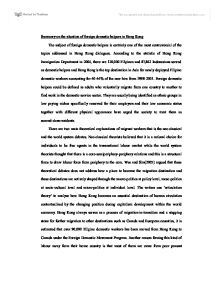 Summary on the situation of foreign domestic helpers in Hong Kong

Summary on the situation of foreign domestic helpers in Hong Kong The subject of foreign domestic helpers is certainly one of the most controversial of the topics addressed in Hong Kong dialogues. According to the statistic of Hong Kong Immigration Department in 2004, there are 120,000 Filipinos and 87,842 Indonesians served as domestic helpers and Hong Kong is the top destination in Asia for newly deployed Filipino domestic workers accounting for 40-44% of the new hire from 1998-2001. Foreign domestic helpers could be defined as adults who voluntarily migrate from one country to another to find work in the domestic service sector. They are usually being identified as ethnic groups in low paying niches specifically reserved for their employers and their low economic status together with different physical appearance have urged the society to treat them as second-class residents. There are two main theoretical explanations of migrant workers that is the neo-classical and the world system debates. Neo-classical theorists believed that it is a rational choice for individuals to be free agents in the transnational labour market while the world system theorists thought that there is a core-semiperiphery-periphery relations and this is a structural force to draw labour force from periphery to the core. ...read more.

Although there is a minimum legal wage set by the government, supposed to be a form of protection in recognition of the specific vulnerability of foreign domestic helpers, the some employers may threaten to dismiss them if they do not accept underpayment and even their due salaries and other entitlements are denied to them. The most serious problem concerning their income is that foreign domestic workers have to pay a lump sum of dollar to satisfy the foreign employment agency fee. Although Hong Kong legislation restricts the agency fee to be 10% of the worker's total income, the lack of common consensus between their home country and the working destination always make them pay much more than that. In the case of Indonesian helpers, they usually have to pay more than HKD$ 21,000 for the agency free which equal to 90% of their first seven month's salaries, and the actual income is only HKD$300-500 per month according to the Asian Migration Centre. Agents sometimes saddle workers with large initial loans and overcharge for transfer fees, and room and board, sinking domestic workers deeper in debt, in a few cases placing them in situations akin to debt bondage. They may also place domestic workers in employment situations different from those to which they had originally agreed even to employers they know to be abusive. ...read more.

However, it is no secret that the news media is market-driven, it is the reason why the problem faced by foreign domestic helps is still on-going as the issue of domestic helpers are always lack of commercial values. The media tends to cover ethnic issues only when it impacts mainstream society, and there always lack of sensational report showing what difficulties foreign domestic worker is facing that can catch public attention. Unless vast and drastic changes occur within the media, minorities will still continue to be marginalised and treated as categorised individuals under the constant threat of prejudice. In conclusion, legislation is one of the ways to combat difficulties foreign domestic workers are facing, but may not be effective or enough. The government has to make a decision to educate the public and more importantly the private sector about discrimination rather than legislating against it. However, there is little sign of behavioral changes by the public towards foreign domestic workers showing the recent educational approach has shown little evidence of effectiveness. Action must be taken to educate and legislate in all sectors and should be continually reported in the news on a regular basis. Reference: Wee, V and Sim, A. 2005. 'Hong Kong as a destination for migrant domestic workers'. In Yeoh, B S A, Huang, S, Abdul Rahman N (eds), Asian women as transnational domestic workers. London and Singapore: Marshall Cavendish. Pages 155-189. ...read more.