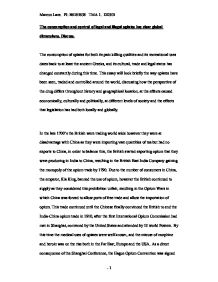 The consumption and control of legal and illegal opiates has clear global dimensions. Discuss.

The consumption and control of legal and illegal opiates has clear global dimensions. Discuss. The consumption of opiates for both its pain killing qualities and its recreational uses dates back to at least the ancient Greeks, and its cultural, trade and legal status has changed constantly during this time. This essay will look briefly the way opiates have been seen, traded and controlled around the world, discussing how the perspective of the drug differs throughout history and geographical location, at the effects caused economically, culturally and politically, at different levels of society and the effects that legislation has had both locally and globally. In the late 1700's the British were trading world wide however they were at disadvantage with China as they were importing vast quantities of tea but had no exports to China, in order to balance this, the British started exporting opium that they were producing in India to China, resulting in the British East India Company gaining the monopoly of the opium trade by 1790. Due to the number of consumers in China, the emperor, Kia King, banned the use of opium, however the British continued to supply as they considered this prohibition unfair, resulting in the Opium Wars in which China was forced to allow ports of free trade and allow the importation of opium. ...read more.

The UN estimates that some 200 million people (4.8% of the world's population aged 15-64) use illegal drugs annually with 25 million being classed as problem users (0.6%). (See p.9 of the report.). The consumption of illegal drugs is also a diverse subject; many people in developing countries who are suffering from malnutrition and extreme poverty, use opiates to elude the pains of everyday life, following cultural traditions. Many areas in Asia, especially those in the poppy producing regions, such as Afghanistan, have for centuries used opium as a cure for hunger and cold, consuming it by drinking it in tea or smoking it in pipes, however, with the production of poppies growing and laboratories converting it to heroin locally, these habits are changing, as is the availability of heroin in the countries in the area which were previously in the Soviet Union. Many of these countries have no resources and therefore the illegal drug trade is a double edged blade, providing an income and wealth on one hand, whilst on the other, leaving thousands as addicts and therefore in worse poverty. The sheer size and illicit nature of the opium economy mean that it infiltrates and seriously affects the regions economy, state, society, and politics. ...read more.