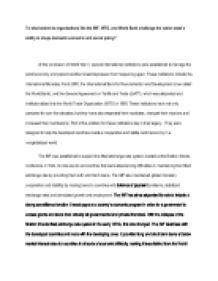 To what extent do organizations like the IMF, WTO, and World Bank challenge the nation states ability to shape domestic economic and social policy?

To what extent do organizations like the IMF, WTO, and World Bank challenge the nation state's ability to shape domestic economic and social policy? At the conclusion of World War II, several international institutions were established to manage the world economy and prevent another Great Depression from happening again. These institutions include the International Monetary Fund (IMF), the International Bank for Reconstruction and Development (now called the World Bank), and the General Agreement on Tariffs and Trade (GATT), which was expanded and institutionalized into the World Trade Organization (WTO) in 1995. These institutions have not only persisted for over five decades, but they have also expanded their mandates, changed their missions and increased their membership. Part of the problem for these institutions lies in their legacy. They were designed to help the developed countries create a cooperative and stable world economy in a nonglobalized world. The IMF was established to support the fixed exchange rate system created at the Bretton Woods conference in 1944; its role was to aid countries that were experiencing difficulties in maintaining their fixed exchange rate by providing them with short term loans. The IMF also maintained global monetary cooperation and stability by making loans to countries with balance of payment problems, stabilized exchange rates and stimulated growth and employment. The IMF has since expanded its role to include a strong surveillance function: it must approve a country's economic program in order for a government to access grants and loans from virtually all governmental and private financiers. ...read more.

on products considered as sensitive by Argentina, increase in tariffs on imports of crude oil by South Korea, re-introduction of export subsidies for certain dairy products by the European Commission, and a rise in import duties on cars and trucks by Russia. There has been much speculation in joining international institutions and publicly agreeing to abide by its rules, norms and practices because it has important domestic political consequences. It can help domestic leaders to alter policies at home that they otherwise would not be able to do. It can help them lock in "good" policies (i.e., ones that enhance general welfare) and resist pressures by special interests to adopt "bad" policies (i.e., ones that benefit special interests only). For others the key is that achieving cooperative agreements with other countries brings advantages for some domestic groups that otherwise would not be involved in a change of policy; once their interests are engaged through the multilateral process they can become strong proponents for policy change at home. The domestic political consequences of IMF and World Bank membership may be important but little research addresses this directly. Many websites note that countries underwent IMF programs out of choice as much as necessity. Governments were using the IMF to produce changes in policies that they desired. But unfortunately, these changes did not produce economic growth or poverty reduction. ...read more.

The critic's theoretical understanding of the WTO as a vehicle only moved by corporate profit-seeking logic is borne out from the WTO's history to date. In every case that has been brought to the organization challenging environmental or public safety legislation on behalf of corporations, the corporations have won. When foreign commercial shrimp fishing interests challenged the protection of giant sea turtles in our endangered species act, the turtles didn't stand a chance. Critics of the IMF say that since the 1980's, the organization has been bailing out countries during financial crises with emergency loan packages that have specific conditions. With this assistance, countries have to follow the IMF's policies to get loans, international assistance, and even debt relief. The predictable consequences have always been disastrous. Tight monetary policy and skyrocketing interest rates not only stop productive investment, stampeding savings into short-run financial investment instead of long-term productive investment, it keeps many businesses from getting the kind of month-to-month loans needed to continue even ordinary operations. This fosters unemployment and drops in production and therefore income. Fiscal austerity-raising taxes and reducing government spending-further depresses aggregate demand, also leading to reductions in output and increases in unemployment. Likewise, if any of the government spending eliminated was actually improving people's lives, then reductions in those programs eliminates those benefits. Privatization of public utilities, transport, and banks is always accompanied by layoffs. Whether productivity and efficiency is improved in the long run depends on how badly the public enterprises were run in the first place, and if private operation proves to be an improvement. ...read more.