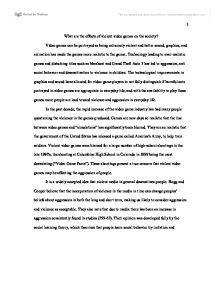 What are the effects of violent video games on the society?

What are the effects of violent video games on the society? Video games can be portrayed as being extremely violent and better sound, graphics, and animation has made the games more realistic to the gamer. Technology leading to ever-realistic games and disturbing titles such as Manhunt and Grand Theft Auto 3 has led to aggression, anti social behavior and desensitization to violence in children. The technological improvements in graphics and sound have allowed for video game players to not fully distinguish if harmful acts portrayed in video games are appropriate in everyday life, and with the availability to play these games more people are lead toward violence and aggression in everyday life. In the past decade, the rapid increase of the video game industry has had many people questioning the violence in the games produced. Games are now days so realistic that the line between video games and "simulations" has significantly been blurred. They are so realistic that the government of the United States has released a game called America's Army, to help train soldiers. Violent video games were blamed for a large number of high-school shootings in the late 1990's, the shooting at Columbine High School in Colorado in 1999 being the most devastating ("Video Game Facts"). These shootings present a true concern that violent video games may be affecting the aggression of people. It is a widely accepted idea that violent media in general desensitizes people. Hogg and Cooper believe that the incorporation of violence in the media in time can change peoples' beliefs about aggression in both the long and short term, making us likely to consider aggression and violence as acceptable. They also note that due to media there has been an increase in aggression consistently found in studies (259-63). Their opinion was developed fully by the social learning theory, which theorizes that people learn social behavior by imitation and observation, repeating rewarded behavior (Myers 366-70). ...read more.

(Aguilar 8A) Because of recent events in America involving school shootings, the importance of the role of parents has been discussed more frequently here and there, especially regarding how much parents can control what their children see or do. But can parents know what their child's whereabouts and actions are every minute? It would be difficult to say that they could, such as when their children are at video arcades or playing games at a friend's house. Actually, arcade games are as popular as home versions (Dietz 425),and many children commonly spend their time at arcades. Moreover, like a lot of mothers in the world, American mothers nowadays must also work to improve their family incomes, and have very little time to stay at home and watch their children. However,they can at least check and control what kinds of games their children buy and play at home. Usually new games cost between $40 to $50 which is not a reasonable price for young children, so parents are usually the ones who buy games for them. In fact, I see many children go into game stores with their parents to buy games. So if parents say that they are really concerned about protecting their children from violent games, it's natural for them to ask the sales people and also look for the rating systems on the games. It is the least they can do, and is also a necessary responsibility as a parent. This also means that they can't just blame game companies for their products if the parents don't do what they should be doing. However, as mentioned before, parents aren't always around to see what their children are getting into. Another aspect of parent responsibility is to make sure whether their children are easily mis-led about things that are happening in their environment. They are much more impressionable than elder teenagers and adults. ...read more.

It is obvious that some children who play a game in which they are killed by and killing monsters, will be unjustifiably scared of monsters, perhaps making them more unstable people. Releasing games such as this without restrictions will expose young children to excessive violence. (Faust) However, the desensitization to violence that may be caused by violent video games may be an advantage to people. They may lose their fear of blood, which could make them better suited to be doctors or surgeons. Playing the kill-or-be-killed games can improve peripheral vision and the ability to see objects at dusk, and the games can even be used to treat amblyopia, or lazy eye, a disorder characterized by indistinct vision in one eye. Another possible advantage is when you play an action video game; you learn to better allocate your resources. (Matthews) Criterion D - Solution to problems arising from the issue Policies could be introduced to prevent violent games being given to young people and to prevent games that are too violent from being sold at all. There could be fines for businesses caught violating these rules, and store checks where a minor may attempt to buy a violent computer game, undercover, and if he/she receives it, the business will face fines or may be shut down. These policies would also include in Australia introducing an R 18+ rating for video games, as at present the highest rating for a video game is MA 15+. Changing the rating would protect minors from unacceptably strong content, better informs parents and guardians of what they are buying, and better protect the rights of all Australians to enjoy their freedom of choice. ("EA Calls for R18+ Rating") The solution is limited, as it can only be speculated as to whether it would work. The solution could also be countered by minors asking older siblings or friends to buy violent games for them. All in all, although the solution has some flaws it seems to be good solution, as it discourages the use and tries to prevent the misuse of violent video games. ...read more.