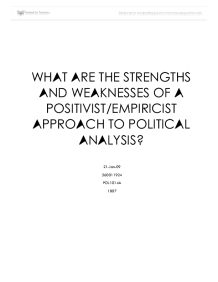 What are the strengths and weaknesses of a positivist/empiricist approach to political analysis?

WHAT ARE THE STRENGTHS AND WEAKNESSES OF A POSITIVIST/EMPIRICIST APPROACH TO POLITICAL ANALYSIS? 21-Jan-09 560011924 POL1014A 1807 What are the strengths and weaknesses of a positivist/empiricist approach to political analysis? Introduction introduction..... Positivists test their theories through direct observation. They contend that as they intend to answer empirical questions, direct observation will maintain objectivity due to them not considering reasoning and understanding behind the act. Direct observation is a quantitative method. For example if looking at voting behaviour, positivists would observe variables such as if someone votes, their age, race and class. This excludes personal motivation of an individual. From their raw results, positivists can construct correlations between the variables in order to establish a predictive model as to who will vote. This scientific method means that the political scientist's own views and experiences will not bias the results. However, many have criticized the idea that positivist methodology is objective. Within positivism, one of the tenants is that knowledge can only come from experience. Theories can only be compiled and tested if one is seeking to establish a casual relationship from prior experience. For example, if a positivist saw a woman crashing a car he may think that all women are bad drivers. ...read more.

Positivists seek to explain phenomena, not to understand it. In this way, they are able to construct casual relationships between variables. However, they have been criticised by other approaches for this, in particular interpretivists. Interpretivists seek to understand, not to explain, political phenomena. The main criticism is that an empirical approach does not take into account the personal beliefs, experiences and motivations behind an individual's act. They contend that you cannot ignore subjective aspects of an action. For example, when looking and voting behaviour, positivists only look at observable behaviour. They fail to take into account that an individual may be voting because they feel strongly about an issue, but at the next election, this issue may have been resolved so they will not vote. Or that a person shares values with a political party and they feel strongly about being represented by them. With this line of thinking, it is not possible to come up with a predictive model for voting behaviour because motivations are different from act to act, depending on their subjective opinion. Another criticism is that positivists only regard what can be observed or measured as important. ...read more.

Unobservable variables, such as worker solidarity in the case of revolutions, have an effect on political outcomes. Therefore, positivists cannot complete their main objective of making causal relationships between political phenomena because these relationships are not always true. They cannot be generalised. Social science is fundamentally different to natural sciences, so critics of positivism say that scientific methodology used in natural sciences is not applicable to social sciences. In natural science, structures exist even without our knowledge of them. For example the law of gravity still applies even if a person is not aware that it exists. However, in social science, structures only exist because we are aware that they exist. This is in direct opposition to positivist view that the world exists without our knowledge of it. However, this is easily refuted when looking at certain structures in society. For example, the government can only rule the people because the people acknowledge that they are in power. If people did not recognise that the government was in power, then the government would not be able to keep law and order. Therefore, it is hard to justify using the same methodology to explain political phenomena as scientists do to explain natural phenomena. A scientific approach to the study of social sciences, in particular politics has its strengths and weaknesses. ...read more.

The author of this essay submitted a D grade - and I can't say I'm surprised. It is nevertheless instructive for anyone writing on positivism in the social sciences, because it displays some common pitfalls. The primary problems are:

1) A serious lack of understanding. At points the author claims things that simply aren't correct, but more worrying is a general conflation of epistemology and methodology that suggests they don't really grasp the difference. Positivism and quantitative research are not the same thing. Nor are knowledge claims and knowledge subjects.

2) A total lack of referencing. I suspect the bibliography contains impressive things on the reading list that the author never opened. If they did, why didn't they reference them in the essay? If they *had* referenced these books in the essay, it's likely they wouldn't have been able to make half the mistakes evidenced her